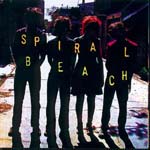 I hate having to write this review.

About three months ago I saw Spiral Beach live, anonymously stuck between fellow Torontonians Laura Barrett (sounds like Joanna Newsom, looks twelve, is very charming) and the Hidden Cameras, at Halifax’s Stage Nine. After being awkwardly introduced to the audience by a friend—who quickly trashed his pre-written intro after being mocked by the band for using the word "melange," opting instead to describe a "way awesome" slide-slash-treehouse that brothers Airick and Daniel Woodhead (son of Canadian folky David Woodhead) had in their backyard as kids—they quickly revived a sold-out crowd still regaining full consciousness after Barrett’s sedating kalimba folk. The band—guitarist/vocalist Airick, drummer/lyricist Daniel, keyboardist/vocalist Maddy Wilde, and bassist Dorian Thorton, each still in their teens—tore through a thrilling half-hour of eccentric indie rock-slash-new wave-slash-space pop, easily holding up against the Cameras’ own refined (and these days decidedly less theatric) set just moments later.

So I walk out of there—now in an even better mood because the Cameras encored with "Boys of Melody" and debuted a really great new song that kind of sounds like “AWOO”—obviously expecting an equally impressive debut, full of the kind of "genuine energy and youthful confidence" (as they cheekily describe in their bio) they’d exhibited live. But, as it can go with bands this new, self-producing out of necessity or maybe just bad judgement, what we get on Spiral Beach is a flat representation of what they’ve developed since. Ultimately, it’s both promising and frustrating in the way Arcade Fire’s EP was in 2003, or, more suitably, Dismemberment Plan’s ! in the mid-‘90s: it’s the underdeveloped, initial sparks of a new band not yet able to capture the intensity of their live show on tape.

Having seen this band’s considerable growth in the year or so since Spiral Beach‘s recording, it’s hard to to hold such an early misstep against them, but it’s also impossible to ignore this album’s bigger problems, beyond just the stilted production. Most damning is the filler: there’s only enough good material here to fill an EP, and the last three songs in particular—nearly a third of the record’s mere thirty minutes—are just awful. Focusing just on that conveniently sequenced EP (tracks 1 through 7), the band does find an exciting balance between their maturely composed groove-heavy music and tongue-in-cheek, euphemism-riddled lyrical themes (think Supergrass in their own teen years, circa "Mansize Rooster" and "She’s So Loose"). For the most part, they pull off the balance well: for every thoughtfully fucked Lee Renaldo-ish guitar solo, there’s a "new clouds come out and fuck away the frowns"; for every unexpected counter-harmony or glorious synth riff, there’s…"Philosophy is My Cat." Again with the possible euphemisms.

My main point here being that despite their collective youth (Airick’s quick to point out that the Beatles started at 17, which is an awfully optimistic reference point), the band already has an idea of how to create something new and compelling within their familiar confines, even if they aren’t able to properly focus or capture it yet. The promise of what’s to come is certainly clear, though almost exclusively when the songs are kept upbeat enough to fully exploit both their unbelievable rhythm section (another gripe: Dorian gets tamed by the production, but the guy’s a monster live, and likes to duck walk across the stage while playing, ala Chuck Berry) and their two vocalists’ penchant for quirky pop melody. "Philosophy," "New Clouds Hot Clouds," "Voodoo," and "Periscope" all take full advantage of this already potent chemistry, which carries the band until the end of "Day OK"‘s infectious mid-tempo pop. From there it unravels quickly, first with the lulling "The Warm Street," and most egregiously with closer "Spiral Beach Goes on Holiday." Even the semi-ironic title is annoying, but the real pisser is the three minutes of aimless white noise, sporadic piano, and synth burps; following "Warm Street" and the equally trying "Gregory’s Birthday Box," it’s a rotten way to end the album.

Make no mistake, that side of Spiral Beach—the alternate universe Jekyll to "Periscope"‘s Hyde—sucks. And it sucks mostly because, again, there’s the rarest of the rare behind that crap, even rarer since Emergency & I (1999) inexplicably became Travistan (2004) and Enon stalled with Hocus Pocus (2003): a really clever, accessible synth-heavy indie-rock/pop band with a charming, inclusive sense of humour. The unavoidable catch being that, for now, there’s only a handful of songs that’ll even hint at what they’re truly capable of, and even fewer that capture exactly why I’m still reeling from their show months after the fact.

Sigh. My conflicted advice: don’t take any of Spiral Beach too seriously, nor mistake it for a joke, definitely press stop after "Day OK," and know better things are coming.