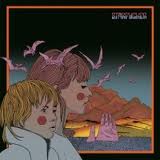 After a well-publicized—at least in their hometown of Portland—waffling over the explicitness of their name, chosen, as described by frontguy Joshua Hodges, on a mischievous lark, Starfucker suddenly gained more fame-ground than their fame-fornicating name foretold. Also annoyingly named “Rawnald Gregory Erickson the Second” found its way to a Target commercial care of also-Portland-headquartered Wieden+Kennedy, the ad agency responsible for the hot guy riding a horse Old Spice commercials and employer every creative twenty-something drools after. (With a hip name and stylish punctuation like that, they’ve gotta have ping pong tables and a Wii in the breakroom.) So, beset with W+K bank and overnight notoriety, Starfucker passed up all the rich irony of their namesake and pussed out, first trying PYRAMID on for size, and eventually going with the just-as-pointless Pyramiddd. When people stopped going to their shows and when the band realized those names were even stupider than what they originally had, they reverted, reserving “STRFKR” for all-ages venues. I feel like a “natch” should go in there somewhere.

Reptilians, the band’s first full-length for Polyvinyl, carries with it all the promise of the hype so lavishly handed them in the short three years they’ve been alive. It’s got some great hooks, some hard-hitting synth lines; it’s got a conceptual trajectory and a thoroughly, hip-ly vintage mix, all warm and muddy, obscuring how direly Hodges seems to be pushing his falsetto; it’s got moments when the purposeful haze is pushed aside to really drive a melody home. For an album so ready for appropriation into Urban Outfitters speakers and the jukeboxes of chic dives, it’s sincerely hardworking, a well-paced, non-stop showcase for the Starfucker’s many talents and tastes writ across a blinking, sans-serif marquee. There are even some well-intentioned “mistakes” sprinkled along the way.

This is the sound of a band using spoons to dig themselves out of the hole they originally dug with a fleet of Caterpillars: somewhere sweetly between MGMT, Passion Pit, and Ratatat, Reptilians is a batch of competent dance-pop—not as groundbreaking as fans have hoped, not as obnoxious as non-fans may’ve assumed—overcompensating for all the patience they’ve tested and the goodwill they squandered on their looping baby-steps back to the Starfucker moniker.

Lead singles “Julius” and “Bury Us Alive” indulge in the brand of twinkly, tingly nostalgio-pop bent on stuttering drum pads and a blanket, buzzing synth melody; dopamine-fuzzed, half-lidded vocals provide something of a backbone when the beats’re overwhelmed. “Mystery Cloud” follows immediately, pulling off a tone both nubile and cold-blooded, replete with chorus of disinterested urban youth. “Reptilians,” titular crux of the album and grammatically suspect, up-ends the sentiment of its name, amounting to the most lived-in track on the album, as well as the easiest to imagine superseded by music willing to explore the more difficult corners of their well-worn sound. On the other white-flecked hand, “The White of Noon” encapsulates and freezes in Carbonite everything Starfucker should now, at the conclusion of “Noon,” abandon: washes of purple-stained keyboards; oneiric, indecipherable vocals; the indecision between moving bodies and breaking hearts. It’s the best song on the album, but it could very well be the only song on the album. Again, the Passion Pit comparison rears its crazily coiffed head.

Meanwhile, a soundbyte crops up throughout the album, mulling over death and one’s acceptance of it, delivered in a professorial patois. It’s one of the few cues we’re given as to what Hodges may be singing about; devoid of markers and lyrical enunciation we assume he’s touching on romance and loss and the afterbirth of an infatuated affair in between. What else could this music, with that cover, with that title—yes, they must be a people whose blood runs cold; so operates a proper Starfucker—engender? What else could a broken hype machine produce? Championing such a brief and full-blown embrace of the ephemeral dance-pop genre, what with its dependence on half-remembered nights and best-forgotten decisions, Reptilians is an album awful concerned with survival. It spells better from them, and sooner, and there’s not much more we should ask of a band still apologizing for the heretofore whole of their existence.