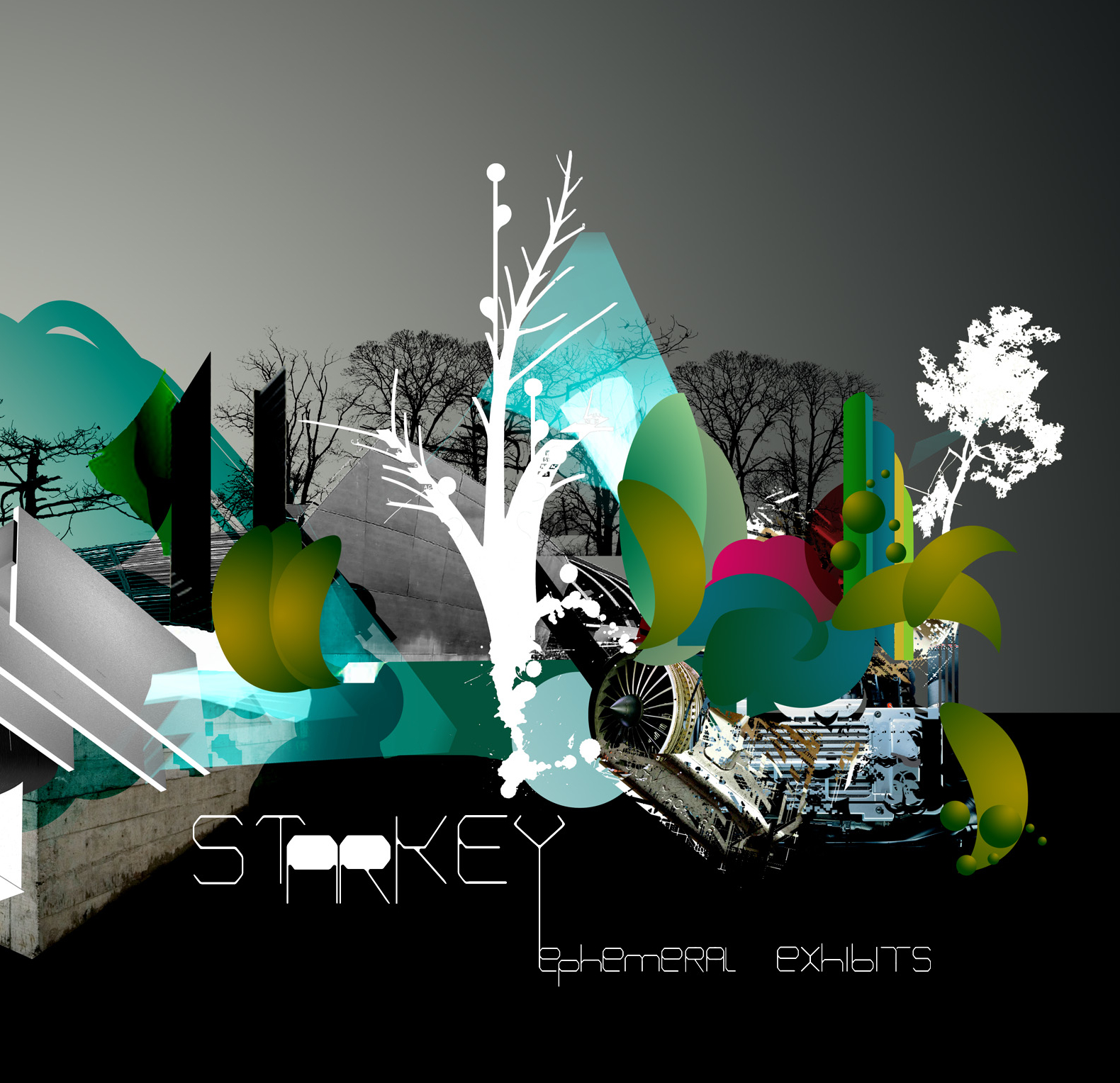 If you’ve got the Director’s Cut DVD of Robocop, and hopefully you do, quickly wind it forwards to fifty-five minutes and twenty seconds. That’s the bit where the gleaming peacekeeper strides through the bad guys’ disco, visor scanning for SUSPECT: NASH, LEON while hairspray-stiff punks party hard on yaba. A grinding electro din tears mercilessly through the crowd, causing all within earshot—pretty much anyone within moshing distance of future Detroit—to gyrate like the Chinese New Year, tripping the light synthetic at the sight of a cyborg in Arrest Mode. (Look closely and you even see Paul Verhoeven doing something approximate to dancing.) It’s a vicious, surreal set piece, and one producers of the rumoured remake need not worry about now that Philadelphia renegade Starkey has released his first studio album. As someone whose compact cubes of post-nuke noise pollution would leave even Wall•E needing a recharge, Starkey farms out monstrous assaults on the brain made from underground pimp-riding effluent: grime, dubstep, crazy bass, and machine-gun fire. He then GMs said monsters with a slow, scientific sadism, sneaking them into the lab during lunch to make an arsenal against the kids who once shot at him. Take that, pubic shit-heel!

Angular, luscious, and more balls-to-the-wall than an abattoir, Ephemeral Exhibits is an hour-long coordinated attack. It hits like a half-brick in the gloom of a nightclub shortcut, ringing for three months after in the ears of anyone who thinks they’re bigger than modern electro. In short, it’s the kind of raw material Hot Chip should have referenced to keep the soufflé out of Made In The Dark, offering concrete proof that not all lecturers have decayed into goatees and PowerPoint. Try “Pressure,” where a tinnitus simulator does devastating things to the seeds of a ruined dance track, and see if you can swallow without wincing. You can see why there’s no Last.fm of it—the fucked soundcard bill would be galactic—but it serves as your warning shot that Starkey’s not just pushing the boat out; he’s filling the hull with priceless crude and telling the skipper to head for Somalia. If the man’s a cad as soon as opener “Gutter Music” drops, initially all server room woodwind, then he’s also smart about it: the raw and rampant production lights up the quiet sequencers and it’s to its author’s credit that he’s able to pulverize the overheating hardware at his feet while simultaneously teaching you specifics.

Beyond the frothy garage and wanton plastic boiling in the album’s twelve channels, Ephemeral Exhibits brings with it just the right measure of intimacy to take the edge off its caustic backtalk. “Time Traveller”’s deep anemones and the industrial fatigue of “Marsh” offer an escape to medicinal nostalgia, giving you time for an emergency wipe-down before you’re hit with all that Philly can throw at you. When it comes, it’s from more directions than you could ever imagine: “Striking Distance,” for example, carries with it a whiff of James Bond tension before the laser meets the testicles and organs splatter, while the acid pranks of “Pictures” sound more relentlessly 1989 than hawking collapsed Berlin Wall rubble to ravers. It’s no great shakes, really; once the hour is up and and all that’s left is deafening silence, you’ll realize it feels good to be this bruised. The overall seduction and triumph of the album is that, regardless of one’s feelings toward towerblock pomp and the crescendos of evil car stereos, Starkey has made something modern and genuinely arresting—something that feels a good deal more genuine than the bedroom electronica of lonely moderators. Even commuters appreciate good graffiti, and to let the whole thing soak through is to fall in the grinder of ghetto intent and emerge feeling blooded and sinister. Be my guest if you’re brave enough to home-study to it; that’s your look-out. Just don’t be throwing punches once you’re psyched and the neighbours come complaining.