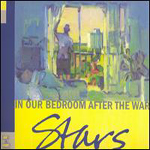 Stars: In Our Bedroom After the War 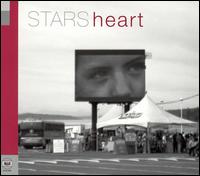 Stars became one of my official favorite bands of the universe when I first heard their debut LP, Nightsongs. In one deft stroke, Stars had turned the tired hipster-up-on-coke-and-down-on-love-just-wanting-to-chill-and-wear-expensive- clothes-like-the-beautiful-people cliché into pure pop genius. This was the lounge CD that you had no compunction about loving, because it was pretty much perfect chill, well-crafted and sparse electro-organic indie-pop. Three things stood out about Stars immediately - first, the languid, gorgeous melodies they constructed; second, the absolutely heartbreakingly beautiful voices of Torquil Campbell and Amy Millan; and lastly, consistently near-flawless lyrics that tended to frame tales of lost love and hopelessness like they were short stories. With their sinister lounge vibe and lines like "International rock star...crucified in my sports car," there was little you didn't adore about Stars.

As it happened, I hadn't even listened to Nightsongs when I first heard of Heart. From what I'd heard from my trusted sources and friends, Heart was a love-y dove-y affair, and I didn't think twice about Stars until I happened across Nightsongs. Naturally, when Nightsongs produced the praise from me that you see above, I decided that everyone was wrong about the nature of Heart. This brutally ironic band, gutting love and old clichés, couldn't make a love-y dove-y record.

I was right. But it's not like things haven't changed with the most awesome indie-popsters around. They've kept nearly everything that I loved about them, and changed in some unexpected ways. On Heart I would dare say that Stars have shifted the electro-organic balance towards more organic, fleshed out sounds, and it works beautifully. That their sound is less overtly sinister on the whole is true, but these are sugar-sweets laced with arsenic; inspection of their lyrical content will reveal the same smart ironies and beautiful cynicism that characterized the band in Nightsongs. An example: in the title track, Millan's choruses of "Alright, I'll make it all up for you / I'm still in love with you," are gutted by Campbell's opposing lyrics, "You get back on the latest flight to paradise / I found out from a note taped to the door / I think I saw your plane in the sky tonight / Through my window lying on the kitchen floor."

Come to think of it, Stars have been listening to some M83 lately - this is where the unexpected changes come in. In the spacious, lovely atmosphere of so many songs on Nightsongs I didn't anticipate room being made for distortion, synths, and orchestras. But on "What the Snowman Learned About Love," the intro track and arguably the best of the album, an M83 intro, in the form of beautifully bombastic synth lines and crackling basslines, is the first thing you hear (after all the band members say "I am ______, and this is my heart" - it would be cheese if it wasn't so damned ridiculous). The intro drops out into a stunningly beautiful melody of piano, lightly plucked guitar chords, keyboard lines, and a warm bass, not unlike M83's beautiful changes of pace in their brilliant album, Dead Cities, Red Seas, and Lost Ghosts. A crackly synth is introduced to complement the already beautiful mix, and distorted, angelic vocals intone: "How the heart bends / The summer she sends / A sky that refuses to die / The weeds of the sea / Wrap round our knees / And a sun too hot to go down / You come around / You come around / You come around…" Subtle, quiet helicopter synths trill in the air like falling helicopter seeds from autumn trees. If Nightsongs was Stars' album for the winter, this is their album for fall.

The connections to shoegaze and M83 only go so far, of course. The ethic of M83 is largely one of bombastic beauty, while Stars are the kings and queens of restraint and sensibility. They will use reverse keyboards and synths, but juxtapose them with gentle acoustic guitar and heart-beat bass, like in "Elevator Love Letter." And their vocals, of course, are still pristine and heavenly. In particular, Torquil Campbell's lovely phrasing of every word he utters is uniformly perfect. He is a part-time actor as well, accounting for his sense of how to enunciate his words, and it comes through, paying off in spades.

In addition to keeping their pop sensibilities intact, though delightfully modified, the lyrical content is still excellent. From "Elevator Love Letter": "My office glows / All night long / It's a nuclear show / And the stars are gone / Elevator / Elevator / Take me home." Stars' imagery is simple but powerful, their stories almost clichés but so warm and originally executed that their genuine character is undeniable.

All the way through this album are pop gems. The first three tracks, all mentioned above, are uniformly superlative, as are tracks like "The Vanishing," punctuated by tasteful wind accents and a wonderful bass hook, its lounge atmosphere both cool and intimate, as Campbell drops lyrics from his sonorous whisper-voice about leaving, distance, and dreams left to dwindle. A distorted background guitar toward the end of the song hints at the pain embedded deep within the sweet sounds of the track, adding the final, perfect touch, as Stars seem endlessly able to do.

And where Nightsongs was colder and more removed, Heart unashamedly envelops you and entrances you. The one truly dark spot on the record - its most out-of-character, and yet brilliant song - is "Death to Death." Eschewing the glowing atmosphere of so much of the album, it directly attacks you with bleeding, rough synths and jabbing guitar, over a cool, excellently appropriate bass. Its lyrics are genius, in fact, so awesome that I'll list nearly all of them right here:

"Wide eyed grinning in the darkened room / Sipping cactus brandy from a china spoon / Coming in the morning in the afternoon / Forgetting / So tired waiting for the end to come / Fully dead already but forever young / Hello my dearest father it's your favorite son / There's some things that I'm regretting." And "A gypsy told my fortune and I told her hers / I said you'll die in the mountains wrapped in silver furs / You'll be looking for your lover in the midnight sun / And you'll perish for you lover when the frost has begun / I have a way of seeing and it's nearly gone / And nobody was listening so I wrote this song / And when you know the chorus you can sing along / You destroy the things you love…"

The albums few low spots are those like in "The Woods," when the twee nature of the song threaten the otherwise flawlessly ironic and beautiful atmosphere of the greater part of the album. But overall they hardly make a dent in what is pretty much a uniformly strong album with absolutely killer emotional weight in several places. Moreover, the new directions that Stars are exploring, while subtle, nonetheless leave plenty of room for more development and further cementing of their status as one of the most consistently pleasing, great bands around. Would you have to be heartless to not like Heart? No, you'd just have to be a black-hearted bastard.