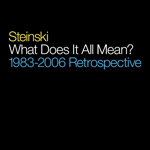 Though at the time a less-than-proficient DJ whose résumé boasted TV advertising gigs rather than hip-hop records, Steve Stein, aka Steinski, knew exactly what he was doing when he and sound engineer Douglas DiFranco released “The Payoff Mix” in 1983. The track—which handily won first place in a promotional remix contest held by Tommy Boy Records—transcended the humdrum expectations of your everyday remix: instead of merely recontextualizing a vocal track over a different beat or tacking on a bunch of scratching, “The Payoff Mix” spliced its foundational track (“Play That Beat, Mr. D.J.” by G.L.O.B.E. and Whiz Kid) with segments from classic cinema, rock, Motown, and many less-decipherable sources, amalgamating its chopped-up beats and chortle-worthy left turns into a spontaneous yet studiously sequenced party jam. In five and a half minutes the mix upturned prevailing conceptions of audio sampling’s appropriate role and limitations and paved the way for countless like-minded DJs and cut-and-paste artists. (Never mind that the mix was also very much illegal.) The epochal piece closes with the compilation’s titular question, “What does it all mean?”—less a rhetorical query than a cocky misdirect dished out by a couple dudes occupying two halves of the same frizzy-haired Frankenstein, who’s this time fully cognizant of the patchwork monster he’s creating.

Not bad for a first try, eh? And here’s the best news: the rest is, for the most part, more of the same. One of the most readily apparent aspects of Steinski’s body of work is just how academic it is; his and Double Dee’s first three cut-and-paste masterpieces, sequenced here in chronological order, were dubbed “Lessons” for a reason: each cycles through the history of hip-hop and its antecedents far and near with a teacher’s show-and-tell sensibility and the attention-grabbing appeal only an ad man could muster. They may not seem on-point at first, occasionally wandering into vaguely tangential realms like a professor who’s a few dropped chalks away from the retirement home, but eventually the genius of it settles in. The “History of Hip Hop” mix, for one, invests much time cycling through feel-good funk and Kraftwerk-inspired dance not only because those genres would later provide rap music with its sonic source material, but because the earliest hip-hop records, released when the genre was still a novelty to most, often indulged these genres at length to hedge rap’s shaky market appeal. Such cultural pedagogy may seem (I apologize) a bit dry on paper, but in practice it’s an ass-shaking joy.

But Steinski and his various collaborators didn’t stop their sample-copping didactics at explicating their music’s origins. They soon entered the political realm, where Steinski would prove himself something of an irreverent, rabblerousing newsman, arguably his most potent incarnation. It began with 1986’s “The Motorcade Sped On,” a strangely giddy documentary of JFK’s assassination and Lee Harvey Oswald’s subsequent slaying. A certain chronological disconnect from the event makes the track’s party-ready feel easier to stomach, placing it in stark contrast with the desolate ambient creep of “Number Three on Flight Eleven,” which stitches together phone calls by passengers on the hijacked plane bound for the World Trade Center’s North Tower. Steinski was far more than an observer, however, splicing his own interjections via samples on tracks like “It’s Up To You (Television Mix),” the sound of a broadcast journalist hijacking the words of President George Bush Sr. and twisting them in the most ironic ways possible.

But as attentively as Steinski’s sights were fixed on the external world and its inhabitants—silly walking blocks of carbon equal parts noble and sycophantic—his sound collages prattle on about himself in nearly equal measure. Beneath Steinski’s discourses on culture, politics, and the state of music lies this conversation to which only the DJ is party, which goes a long way in bolstering these tracks’ already immense self-awareness. See, Steinski was an unapologetic adherent to hip-hop’s old school—even “Jazz,” fruit of his 1998 reunion with Double Dee, arrived with its boots firmly planted in the tunes of the late ‘80s and earlier—and he never shied from mocking his status through crotchety protagonists humorously affirming their (superior) old school status and numerous clips by a finicky record collector (perhaps representing Steinski himself) easily brought to rage by a single misplaced LP. (“Who cares what’s on the flip side of a record?” he asks. “I do!”) Among his multifarious targets for documentation and abuse, Steinski himself appears to be atop the list.

So, what does it all mean? One of Steinski’s quoted commentators may have answered this question best in the opening track of his fabulously assembled “rough mix,” Nothing to Fear (included here on Disc 2): “He was of course very amusing, but at the same time touched a nerve in people.” Too many of today’s mash-up artists and DJs (including Illegal Art-mate Girl Talk) have spent entire careers shooting for the amusing without touching on anything profound or lasting that will tickle a nerve twenty years down the road. Though there are exceptions to this rule (prime being the Avalanches), most similar artists miss out on that weight-adding extra dimension where Steinski flourished—prodding, heckling, and tickling his audio subjects into socially relevant investigations still completely ass-shakeable.