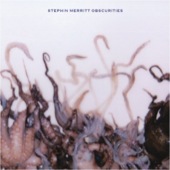 When you’ve written roughly 5,000 songs for something like a half dozen musical projects, a rarities compilation is probably an inevitability. For Stephin Merritt, who once went all in with an album comprised of, as its title promised, sixty-nine love songs, you’d have to imagine the soil being particularly fertile for one-offs, experiments, B-sides, and the odd commission. And if anything, Merritt’s new Merge-stamped Obscurities compilation only confirms this assumption. What it does in addition to this, however, is evidence a well considered objective beyond the process of simply compiling for posterity’s sake. Which is certainly a rare approach, especially when one considers the sheer amount of material that Merritt probably has lying around. Obscurities stakes a more refined, deliberate stance: comprised of fourteen consistently enjoyable and in some cases plain devastating tracks—most all from the pre-69 Love Songs (1999) era—the comp admirably depicts an artist with a remarkably fluid pop sense whose restless process found an outlet across various projects but who maintains an approach to songwriting that is unique to him alone. It’s safe to say that if you’ve had any prior interest in Merritt’s work, Obscurities is self-contained little gift unto itself.

The breadth of the material presented here is certainly a product of its modestly inclusive nature: most of Merritt’s most important bands are represented, from the Magnetic Fields to the 6ths to the Gothic Archies. Five of the tunes are previously unreleased, but even the catalogued material—much of it rare B-sides and alternate takes—will be familiar only to those with the deepest of Merritt collections. For their part, the unreleased tracks live up to their origins: three songs (beautiful opener “Forever and a Day,” the hilariously skeptical indie-pop ditty “When You’re Young and In Love,” and the waltzing “The Song from Venus”) have been rescued from the aborted sci-fi musical Song from Venus, which Merritt was once collaborating on with Daniel Handler, aka Lemony Snickett; a novel solo foray called “Scream (‘Till You Make the Scene)” finds Merritt trying on a more dance-pop oriented look; while the painfully brief “The Sun and the Sea and the Sky” makes one wonder how much more epic Merritt could have gone with 69 Love Songs had this outtake and presumably many more like it had been included at the expense of a sexual entendre.

One of the most unique aspects of Merritt’s early work is his reliance on guest vocalists. It wasn’t until the third Magnetic Fields release that Merritt would become his band’s actual frontman, while with one of his side-projects, the 6ths, he seemed content to feature every recognizable indie vocalist from the era before he himself would take the mic for, like, one song. Which is all to say that there are a handful of guests on Obscurities, and like those early Merritt-penned records, the comp plays off the contrast between its rotating cast with an acute awareness of flow and the potentially odd juxtapositions that can arise from such an approach. It’s particularly satisfying to hear original Magnetic Fields vocalist Susan Anway again; her take on classic Holiday (1994) closer “Tale Ecstasy with Me” transforming the song into an even more claustrophobic depiction of imbibed euphoria. Young Marble Giants’ Stuart Moxham unexpectedly shows up on “Yet Another Girl,” a bonus track from the limited edition London Records vinyl box set of the 6ths’ Wasps’ Nests. And meanwhile, on the album’s most eye-opening transformation, long-time Magnetic Fields collaborator Shirley Simms strips down the original Distant Plastic Trees (1991) closer into something disarmingly quiet and crushingly sad, rescuing the song from some of the dated production techniques utilized on the original (this version happens to come from the K Records cassette Cooking with the Priests).

Even some of the more well known tracks come off more like inclusions based on hindsight and accumulated perspective than filler. An alternate 7-inch single version of the Magnetic Fields’ “I Don’t Believe You,” from 2004s i, finds new life here in a fresh, skipping rendition in contrast to uninviting personalization of its parent album, while the cheeky “Beach-A-Boop-Boop,” the B-side to The Charm of the Highway Strip‘s (1994) “Long Vermont Roads,” is given an opportunity to shine away from the more lonesome, weary music Merritt was writing in the mid-‘90s.

In fact, nearly everything here works in this new context, regardless of familiarity. Fourteen tracks may seem slight for someone with that kind of longevity and creative drive, but if it means we get a listenable, often times surprising collection as opposed to a bloated vault dump, then I’ll take this over something more “complete” any day. With the nice notices it’s received thus far and it’s functionality for both casual and long-time fans, perhaps this compilation will prove to be just the first in what could be an enlightening series of archival releases for Merritt and his many bands. But if not, Obscurities stands tall enough on its own.