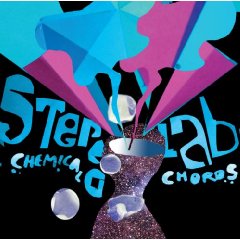 There comes a moment at the all you can eat buffet, before your belt buckle explodes from its yielding hole, that you cross your knife and fork over your plate and, with a protracted exhalation, resign yourself with an exhausted “I’m done.” So I was with Stereolab’s meh-fest Fab Four Suture (2006). Until that record I had been gorging myself like Augustus Gloop on all manner of Labby loveliness, including their varyingly successful side-projects. And unfortunately a lot of Stereolab’s post-Dots & Loops (1997) output had been lacking the freshness of their previous albums, if not altogether stale. There were still those flashes of brilliance which, if not entirely compensating for the dearth of classic songs, still suggested they had the ability to pluck a song full-formed out of the cosmos that sounded both eerily familiar and deliciously alien. I’m talking of songs such as “The Free Design,” “Vonal Declosion,” “Captain Easychord,” and “I Feel The Air (Of Another Planet)”—it’s these disparate scattered gems which keep us buying, on the off-chance we may miss that return to form.

Which brings us to Chemical Chords. First things first: yes, this album still sounds like Stereolab. Sean O’Hagan returns with his string and brass arrangements, to best effect with the string/brass face-off on “The Ecstatic Static” and the Sesame Street flutes of “Self Portrait With Electric Brain.” Sadier’s vocals are still unshakeably cool, as always, and Gane’s guitar-chopping, Moog-pumping monochord compositions still frug with a quasi-childlike glee.

The difference in Chemical Chords lies with the editing. Only three tracks nudge the five minute mark (joyous news for the beleaguered Stereolab fan), and not a single one of these songs can be accused of meandering. Also: unlike, say, “Blue Milk,” they never pummel you mercilessly with a riff just for the sake of it. More importantly, this time they’ve delivered tunes: “Neon Beanbag” is as irresistible an invocation of Motown as Solange’s “I Decided,” at times sounding suspiciously like a wigged out “Heatwave.” “One Note Symphony” pays Antonio Carlos Jobim the only compliment left, by adopting the same compositional theory as “One Note Samba” to produce a sinister and sinewy chromatic plunge into yet more delicious horn arrangements. Perversely, some of the songs are arguably too short; “Valley Hi!” fades out mere seconds after establishing itself, and I could definitely take another seven minutes of “Pop Molecule [Molecular Pop 1]”‘s psychedelic acid rock.

There is one other notable difference: just how care-free and, like on the sunny ’60s West Coast pop of “Cellulose Sunshine,” chirpy it all sounds. Again, this is nothing amazing but after the understandably sombre Margerine Eclipse (2004) , the studious Fab Four Suture (2006), and Laetitia’s cerebral study into duality of the self on Monstre Cosmic (2008), it is refreshing to feel the joy. It could be this which may be the mojo which made the earlier albums so instant—and, for me, the strawberry jello and jovial conversation that drags my carcass back to the dinner table. Bon appétit.