1. Misguided
2. Ticket out of Town
3. Couches in Alleys 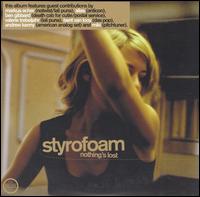 Halcyon days and a massive block of styrofoam can lead a rabble of young lads awry. . . or the culprit may be their own malnourished wits. My friends and I were going to do Mark Twain proud and escape the tyranny of our households; we had schemed up a dream of rafting our way to freedom down the small creek across the road from my house, naturally assuming that said creek must be a tributary of the Mississippi. This dream would be made reality by the children’s wagon and seductive styrofoam hunk discovered in my father’s shed; we tied the two together and hoped their union would birth a sea-worthy vessel. We weren’t quite so stupid as to test the ship out ourselves, though, so my very young, very docile brother was volunteered by the rabble leaders. Of course, he and our raft sank straight way, like the water was air and they a falling cannonball. And my mother descended upon us like a screaming Valkyrie.

No one died, and no, there’s nothing really dangerous about Styrofoam in and of itself. The danger is in letting its synthetic pop lull me into a state of catatonic acceptance: “Pretty sounds, pretty sounds, pretty beep-boop-bip sounds.” Ben Gibbard sings on “Couches in Alleys” just so all the Postal Service fans can confirm that they should be digging Arne Van Petegem’s slightly (and I mean slightly) more eccentric compositions. Vocally, Arne also supplies plenty of his own Notwist-ish mantras: I can feel myself blinking in slow motion, the hairs on my head becoming a halo in the Scandinavian sunlight. Mr. Braff, I’m ready for my close-up.

There’s no getting around it: this sentimental, electronically-hackneyed glitch-pop shit can be remarkably effective, and my eyebrows keep swooning, and my bottom lip trembles as I try to keep the music-critic-ice-grill fixed. But then I ask myself why I’m trying. I have to be honest with myself. I like listening to this. And a lot of my betters like listening to this. And a lot of girls like listening to this. I’ll probably include a track or two on the next mix that I make for my girlfriend. So, please, stand back and watch as I step onto the styrofoam raft and sink, my older and more mature sensibilities running down the hill like my mother, yelling at me for my folly.

I might try to rationalize: oh, Anticon’s Alias drops a hot verse on the stellar “Misguided” and brings his MPC programming skills to three other tracks; Petegem does a smashing job of incorporating guitar swells and piano notes from Markus Archer and Gibbard in his swirling production ditties; halfway into “Front to Back,” Andrew Kenny starts singing, “I read your diary from front to back / The spine is cracked from where you bent it / To where your tears fell, blurred the facts. . . ” and continues in the album’s most sincerely poignant moment. You’d all be right to point and laugh, but just let me clutch my styrofoam and float towards the Mississippi.