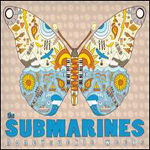 Blake Hazard must have a doe-eyed belief in the transformative power of affection. How else could she sing a line like “I cry love, love / and the sky opens up,” placing her faith in the supposition of a great relationship’s ability to wipe off cynicism’s muddy glasses. It’s not my fare, I admit; I’ve been too steeped in Cormac McCarthy to have much left but embittered adherence to the notion that we’re all too ready to savage one another at the first opportunity to tug ourselves one rung higher on our culture’s rickety ladder.

Except that this is such a good pop record that I don’t know what to do with it. It doesn’t fit in McCarthy’s craggy worldview, where relationships are a last respite against the howling world. I don’t think I can penalize Hazard and other half John Dragonetti (with those two last names there’s a hundred things better they could have done than call themselves the Submarines) for choosing not to contribute to the documentation of our unfortunate state, where each current event on the world stage seems to presage ever more clearly the crumbling edifices of our very humanity. Maybe love does exist and maybe it can save us all.

Well, no, it doesn’t and it can’t, but what the fuck: life is short and this isn’t a self-legitimizing lifestyle too gouged out of substance to see otherwise—it’s a choice. On “The Wake Up Song” Hazard sings “I wake up / I choose love / I choose life,” and goddamn it if it doesn’t make sense because I’m convinced the alternative is Vonnegut alienated beyond being constructive, appearing to a hero’s welcome on the Daily Show only to admit that he’s pretty much given up and there’s no tunnel, let alone a light at the end of it. Choosing love, choosing empathy no less, really is choosing life; that choice makes this kind of sunshine-y pop possible. Then listening to the album over and over again made me think that the vice versa is also true. Too much of this optimism and one might find themselves actually looking at people on the street as missing links to what seemed an evolutionarily fated dispossession of trust.

One might look to twee and say same thing, but twee is a magnifying glass held with twisted delight over life’s absurdities until it’s all you can see and it truly does become self-legitimizing. It doesn’t surprise me at all that Daniel Smith of Danielson Famile, lately considered twee’s de facto ambassador, is also a Christian; his music sounding as enamored with near-ecstasy as it does, it’s not surprising he’ll also believe in a god-man whose only wish was for us to all love one another.

Hazard, far more maturely than the initial listen might imply, instead posits the choice in us. Vonnegut was a big-time Humanist, but in the end he lost faith in our ability to divine that life-giving wellspring of empathy beneath the caked cynicism that life bakes over top of us. Hazard is either too young or too optimistic to see the same deficiency, opting to believe in our ability to interpret Honeysuckle Weeks as relevant in a way that capital-I important albums can’t achieve for their inability to see past their own impositions and interests.

Who can blame the two for wanting to tell us about their love? Apparently Hazard and Dragonetti were a couple who broke up and whose music documents the estrangement and eventual reconciliation. It’s a prepackaged narrative I’m sure you’ll read in every review of their music but an essential one nonetheless, painting this kind of cheeriness with a universality that makes one think the kind of happiness they’re writing about is actually possible for everyone and anyone. Here their relationship is an extended metaphor for renewal, pretty much everything in the universe made right, and for all one’s first instincts to roll eyes at that kind of impulse that also makes Facebook an indigestible string of pictures of people from high school with new babies and rocks on their fingers, this music sounds so sincere that—two strangers that they are—you’re fucking happy for the both of ‘em.

I’m not quite sure what it means that my first instinct is that what makes Honeysuckle Weeks sound so tamely content is also what makes it so refreshingly new. Nothing like the manufactured innocence of so many pop bands, which can only exist as a contrast to stultifying darkness and broken perspectives, the Submarines seem to be operating in a vacuum of inverted limitations. The album is a surprise for it.