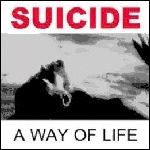 A Way of Life

When discussing Alan Vega and Martin Rev, the vocalist and keyboardist for New York legends Suicide, "criminally" and "undervalued" often two of the first words to come up. For the band who supposedly coined the term “punk” in ’71 and who had a lot to do with the onset of both industrial music and synth pop, Suicide seem to get a far amount of props, though not a massive outpouring of adoration (perhaps because Vega used to swing chains at his audience in the band’s, uh…developmental period?). With a new biography on the shelves this Fall and two freshly remastered reissues on the way from Mute, perhaps the band can finally claim a little of that lost love.

Those re-issues---1992's A Way Of Life and 1992’s Why Be Blue?---focus on some of the band’s later records---work that came at a time when Vega and Rev were reunited after years of going solo and trying to get some recognition for the sounds they’d trademarked after seeing other bands find the audience that had always alluded Suicide. As such, they’re slightly poppier than the band’s first few albums, but only in a relative sense; Rev’s droning, ghostly keys, fuzzy robo-percussion and ephemeral melodies still weave in and out behind Vega’s sub-rock Elvis meets Lou Reed vocals, leaving behind a set of seductive, detached urban horror-rock.

A Way Of Life kicks off with “Wild in Blue,” an idustrial dance classic and immediately sets the tone with frosty beats and Vega’s claustrophobic, icy vocals (the lyrics on the song are a tad environmentally obsessed---but hey, it was the '80s). “Surrender” is an oddly produced Elvis doo-wop song complete with backing girls ooo-ing and aaah-ing; it’s a sweet love song, but no “Cheree.” Vega’s intense obsession with Elvis seems to show through in his vocals more here than ever before. Songs like “Rain of Ruin” and “Suffering in Vain” are more upbeat sonically, while still hinting at Vega’s fractured relationship with just about everything. A Way Of Life may not be Vega and Rev at the height of their powers, but it retains their raw side nicely---it holds up surprisingly well and stands with their best..

Unfortunately, the same cannot be said for Why Be Blue?---a wacky set of pop songs that find Vega and Rev seemingly tripping on happy pills that just don't suit them. The title track, with it’s bouncy keyboard lines and kinetically-charged happy go-lucky vocals, is a misstep; Rev’s keys, while more upbeat, retain interesting compositions, despite occasionally drifting into UB40 territory, but Vega’s pseudo-political lyrics get pretty painful at points. On the other hand, the two have always profited from their relationship with Ric Ocasek of the Cars, who was a huge fan of the band and produced most of their work from their second album on and is present on both albums to lend direction and presumably bring out the poppier edge to Rev’s riffs. His production sounded good on the originals, and its only been improved on the remastering---lending a new depth to the records.

One of the main points of interest of this set of reissues is the added live material on each album. A second disc of live material has been included on each, essentially giving two entire concerts worth of live material. It’s amazing how accurately their live show reflects their sound on record, and the sound quality on both is impressive. The band’s classically confrontational approach is recorded in the London show included on Way of Life, while the fans are far more adoring in a celebratory affair in Paris on Why Be Blue? In a way, the crowd’s reaction at each show sums up each album---in the first, the crowd is angry and confrontational with the still vital band, in the second the crowd is adoring and forgiving of any musical missteps, just happy to see their idols. A Way Of Life is one last document of Suicide at their best; Why Be Blue? feels like a reunion tour.