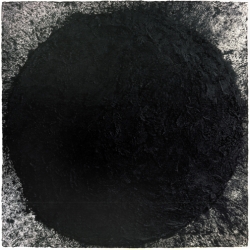 In a recent interview I did with Greg Anderson and Stephen O’Malley, they continually went to great lengths to establish how much of Sunn O))), with its endless stream of collaborators, was about eradicating their individual egos. This concept takes on a new, uh, dimension with Monoliths & Dimensions, an album with upwards of a few dozen musicians. The references to jazz—one track dedicated to Alice Coltrane, another two possible nods to Miles Davis—may seem at first like empty markers of diverse tastes, but how many other non-jazz artists manage to be simultaneously unmistakable and also only one part of a shape-shifting project much bigger than themselves?

This idea of the duo as a core (made literal on opener “Aghartha,” an ode to the mythical world in the center of the Earth) has carried so much currency that at this point it seems like the achingly-slow, deep-bass vintage amps (I don’t need to tell you which ones) that characterize the sound of Anderson and O’Malley proper could just be a platform for other musicians to take-off from. Like the two of them represent the polar opposite of silence, an equally neutral force with an equally infinite number of possibilities. As if the band started when My Bloody Valentine left their guitars in a feedback loop on stage after walking off, and they’ll swell forever like that until other musicians are inspired enough to come and play on them. Hyperbole, yes, but it’s hard not to be astounded by an album which by all accounts should have sounded like Dream Theater or Apocalyptica or something else nicely crushed under the weight of its own ambition.

But with the world being still continually hampered by connotations there’s that other unfortunate detritus—because we still haven’t fully managed to wash off the residue of Metallica yet—that must be dealt with. Perhaps the endless caverns of distortion so low you swear you’re really only feeling most of it and not actually hearing it will always remind one of the nagging fact of one’s own inevitable shuffling-off period—if not of quaint Robert Plant/Moroder-isms, the connection between which I’ve never fully understood—but that need not be a bad thing. In fact the snot-nosed comments found in recent letters to The Wire only served to further convince me that what I was listening to really was something groundbreaking, because how often do you piss-off avant-garde fans these days, people who have already heard Wilco complete the circle between Jim O’Rourke and Dad Rock?

So, yes, Monoliths & Dimensions is about death. Though I would add a caveat that it’s about your death specifically and not some comforting universal treatise on death in general. Sunn O))) have always brought the comparisons to occultish death metal bands on themselves, make no mistake: the hooded robes and fog machines are enough, if not the fact that they’re named after a brand of amplifier (and in response to their initial idols, Earth), both of which scream the kind of conservative/inbred universe of metal that their music has never really fit into taken on its own. It’s a bit like when the Knife came out, gleaming, a band with similar monochromatic tendencies and theatrically masked stage shows. When you get past the initial impressions of both Silent Shout (2006) and Monoliths & Dimensions, you find something not only stellar but surprisingly different from one’s initial impression. I would say that Sunn O))), rather than ignoring the history of heavy music that came before them (which would be somewhat ignorant and elitist anyway), are destroying it from the inside. Did I mention this thing’s about death?

Seriously, though, I can’t think of better modern disciples of Pauline Oliveros’ “Deep Listening” philosophy, one which resonates heavily with Sunn O)))’s own self-eradicating principle. Despite the presence of trombones, an upright bass trio, piano, violin, viola, hydrophone, Tibetan horns, clarinet, French horn, numerous guitars, choirs, tubular bells, Satan, and so much etcetera, the same basic interest in attack/decay, sustain/release, the aleatoric effects of allowing single chords to resonate for long periods of time—this is the shit that remains, unflushably so. This also presents a central paradox, which Anderson pointed out by noting that on all their albums, this one included, the Sunn O))) “sound” is “painfully apparent.” It suggests that Anderson and O’Malley don’t really need to have a tight grip on their guest musicians, as if everyone already knew what to expect. The result is just like that cover: the fringes provide all the character, but that black core is still most of what you hear.

Opener “Aghartha,” for instance, spends a good portion of its 17 minutes with just Anderson and O’Malley on guitar and bass. It’s one of the heaviest and bassiest tracks they’ve ever done and when Hungarian vocalist Attila Csihar enters after 5 minutes or so, he comes across like merely another part of the ripple of feedback, thus pulling the whole band even lower like a car revving its tires in the mud. Xasthur’s tortured screams on Black One (2005) may have had a greater visceral impact but Csihar seems to blend into the fabric of the track more effectively. His vocals and the guitars set the mood so well that you barely notice when the track expands to include scratching violins and multiple dung chens until near the end when the effect is decidedly one of standing on a giant structure that’s about to give way. And that structure is probably made out of pitch and bones.

The rest of the album isn’t as heavy or intense, but it does provide a few key paradigm shifts. I’ve already pontificated on “Big Church,” but suffice it to say that it’s not remotely what you’d expect with a Viennese choir. The vocalists are just as disciplined and minimal as the other instruments, articulating single notes in a way that seems less like they’re projecting than gasping for breath, while Csihar’s schizophrenic mumbling, though quick and erratic, still seems to mix into the track’s steady drone. Also that sudden silence that follows those bells represents a rarely noted and much needed sense of structure and composition.

“Hunting & Gathering” is equally structured but in a completely different way. In fact it’s the closest I’ve heard the band come to a straightforward (if still painfully slow) metal riff, drowned in static for the first couple bars but then coming across clear as sludge. The subversion is in the way it clears out into a bridge of horns and a man-choir (featuring noise artist Daniel Menche of all people)...not to mention the fact that even when it is there, it’s still just one riff, one that cracks and lumbers to move under all its weight. Which perhaps is another way of saying that this comes pretty close to what Isis and Neurosis have dedicated their entire careers to, just with a wider set of tools and at least 58% more apocalypse.

But just when you think these guys couldn’t be any more surprising at the same time that they’re doing what you expect them to, “Alice” has (surprise!) notes on the guitar actually picked out rather than just strummed and horns which take the front seat. Yup, sounds about right. It’s not exactly Coltrane at first, with the guitars resonating and the horns echoing in sequence, but then a solo trombone breaks out into a melancholic solo (no doubt Julian Priester, who cut his chops with Duke Ellington, Sun Ra, and the other Coltrane), and is followed by oboe, strings, and even a harp, the latter which rounds out the album on a shockingly gorgeous note, as stately and uplifting as the late master. While there’s certainly nothing on the album with near as much light as this, it does seem to be a clear move away from the unspeakable bleakness that was Black One. While that album seemed to pull everything around it with a sharp downward force, Monoliths & Dimensions feels like a testament from a deep pit of despair with nowhere to look but up. They might never get out but the hope is in the fact that everyone involved is in the exact same spot.