Other Records by Sunset 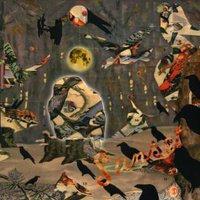 Loveshines But the Moon is Shining Too

Oh, yes, Summer 2006 was the summer of Snakes on a Plane. It was also the summer of a blistering “oh snap” Pitchfork review, which opened with a grimacing reference to the movie and closed with Austin’s—elsewhere-well-received—Sound Team, completely eviscerated. They were prodded, shredded, mercilessly chauffeured to the burn ward, and left there with nothing but their charred dicks and a 3.7 rating in their hands. While some bands gracefully demure to such critical incinerations or respond with turn-the-other-cheek-isms and unaffected Princess Di smiles, for Sound Team’s Bill Baird and entourage, revenge was a dish best served en flambé (literally) over the YouTubes (if you haven’t seen it, you can watch it here) with a red, Kanye-sized “THANKS” as punctuation.

One of the first instances I heard Sound Team, it was also the moment my heart just threw open a mercy-shaped door and said, “Aw, you guys…Come right on in, you guys.” Since that summer in 2006, a handful of Sound Team members have moved on and congealed to form {{{Sunset}}}, which was critically likened en masse to the sound of an array of ambient or folk artists getting lit with the Beach Boys. Seriously, almost always: it’s something with drugs and the Beach Boys. A little rough around the edges, with hit-and-miss releases, their sound was chock full of laid-back but on-the-nose harmonies, universally folk-ish themes, earthier sounds interspersed with ambient, electronic dustings, and the occasional ceiling-spinning afterglow.

And now, just as the butterfly emerges from its cocoon, so too Sunset emerges from their exoskeleton of birdie brackets to spread some well-seasoned songwriting wings that stretch and leave all beach sand and soil behind. With track titles that range from early mornings, to sunsets, to moonlight, gone also are any previous earthen qualities. And hopefully gone with all the above are the Beach Boys references. Now, with their backs stretching out on that soil or sand they spent so much time nosing around in, they turn their faces upwards, putting their eyes (and significantly engorged pupils) to the sky, as if to a kaleidoscope of fresh orchestral pop and psychedelic folk, and watching it turn.

With sun-on-your-face Beatles-like warmth and good-natured catchiness, it doesn’t sound anything like food poisoning psychedelia or the stuffy psychedelia that feels like being hot-boxed too long in someone’s trippy basement in a downward-spiraling house party. Which is always something I worry about when presented with the term. One of the freshest-sounding albums I’ve heard this year, Loveshines But The Moon Is Shining Too is a celebration of resilient tremolo comprised of piano-stricken eighth notes with a shuffle-and-snap pace and playful found sound percussion that shine on your brain like a really pleasant high. At times the strings feel like lyrics; at times the percussion feels like lyrics; at other times the vocals step in to play the role of percussion: Loveshines is an open-air soundscape where twinkly toy piano notes tinkle and echo, where cleverly scavenged sounds and mirror-fogging “haa” noises are arranged in intelligent pairings with swaying duets, and where harmonies and vocals that could be lifted right out of the late ‘70s possibly have been.

While some artists rely on male and female dynamics to set the contrast of sweet and salty (or airy and emotionally anchored), Sunset’s featured female vocalist Crystal Fulbright provides instead an extra psychedelic element that ribbons in and out of the tracks. On “Late Night Drawing” she’s careening hand-in-hand with Red Hunter; on “Heavy Light” she’s pairing up with Bill Baird to divvy up the chorus, splitting the pronunciation of those two words in a style reminiscent of those Muppet aliens on Sesame Street. Or, more conversationally, in a duet-driven “Dusty Diamonds,” with ragged bars of fast-sawed strings and interruptive shudders of cello (the “dust”), she skews the clean piano rhythms and the almost amateurish rises as the chorus, reaching at notes that seem charmingly out of her vocal comfort zone. You can practically hear her swaying and exchanging Sonny and Cher grins with her partners.

Noticeably interspersed throughout the album are several variations on “Loveshines.” Certainly three takes on one song in an album may seem like overkill, especially since the LP isn’t exactly hurting for tracks, but it’s the aforementioned vocal play and clever tilting of atmosphere and orchestration that just nail it. “Loveshines” the first gives Baird a copious amount of space without much ornamentation to muddle his half-gruff, half-murmured lyrics. With nothing but a baritone dropshadow and some drooping bass, the song throws dark lights underneath Baird until it all suddenly runs away in a rapid meltdown of strings. For “Loveshines II,” that familiar tremolo takes on shakers and bass piano bars, with Baird this time receding to join the shadows in the background. His voice is half-eaten by moths or acid, wrapped in Fulbright’s vocals, whose clarity occasionally pierces through the chorus. It is a more fully-fleshed, beat-enthused take, occupying the middle ranges, generating momentum and camaraderie—fittingly enough, ending with a muffled giggle. “Loveshines III” approaches the song from a skewed angle, with electronic fuzz warming up the opening, incisiveness around the dropping piano chords (which do sound a little tired at this point). III comes back out from the shadows, an odd-tuned sourness to the vocals. The three versions demonstrate not that the band’s indecisive, but how strong they are as composers. They’re kind of fascinating songwriters.

Tender is the Sunset, though, and the last track could fit anywhere in _Napoleon Dynamite_’s prom scene. “Your Soul Glows in the Dark” flutters in with swoons of strings, swells of heart-pulling vocals, and faintly strummed harmonics. Baird’s voice seems to land back on earth to tunnel in deep. Having the moody depth and reverb of a filled well, sparse elements hold lightly suspended over his final, ghostly sentiments like a reflection of a toenail-thin moon at the well’s surface.

While Sunset still upholds a longstanding notoriety for cheeky “aw, you kids” antics and mic raids, their braces are off and they’ve reached an impressive, fully realized sound that’s something along the lines of the Beatles getting hair-petting blazed with the Walkmen: psychedelia that comes paranoia-free. Every song, elevated by elements and harmonies that don’t sink, only lifts itself to higher and higher ranges, accessing every bit of airiness and atmospheric breathing-room the subject matter affords. Sunset shines now not with silly brackets but with a fresh sound that radiates its own particular brightness—and rests pretty darn safe from incineration.