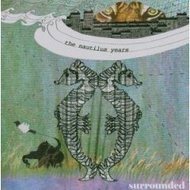 The Nautilus Years seems like it has all the time in the world. This isn’t minimalism, since it’s not about extensive repetition and minute changes, but about a measured, mid-tempo pace and rhythms that rarely change. The strengths of Sweden’s Surrounded don’t really exist as a measure of originality or musical ingenuity so much as just inhabiting a gorgeous space with grace and assurance like music is all we have to do, ever. This is a nice quality, and it keeps the band from falling under the foot of some of their more obvious contemporaries. The whispy, heavily-chorused vocals are a dead ringer for Sparklehorse’s Mark Linkous, but Surrounded avoids that band’s preciousness and occasionally forced nostalgia. Likewise they have the same warm-blanket lush sound of Mercury Rev without, well, the countless things wrong with The Secret Migration (2005).

I’ve never been quite at peace with vocal effects used to make voices more human, but The Nautilus Years is a great reminder of how disarming a little buzz can be. On “The Oceanographer” vocalist Marten Rydell sings with only spare piano chords and faint strings backing him, while his s’s roll off into delicate pools of static. On the 10-minute “Human Pelagic” his vocals barely come above a whisper, even sounding like they’re about to crack, which is odd considering that the album is nothing if not completely blissed-out, lacking in any urgency at all. But perhaps that’s the point: combining intimacy with grandiosity in a way that allows the music to be the songwriter’s consolation. In other moments his voice sounds tender and fragile and occasionally turns into a husky, speak-sing not unlike Ira Kaplan. And on “Easy Piranhas” he effectively strikes against the cocoa/blanket tone with an almost infantile bitterness: “You’re just another whore.”

Of course, while his voice is capable of a great deal of expression, there’s no denying that the pace and mood is almost completely uniform. Still, this stuff is so perfectly engineered to be pleasurable it’s hard to find any specific weak points. Someday when the Flaming Lips are scoring elevator trips this will be MOR, but for now this lush bedroom-pop feels like chicken soup.