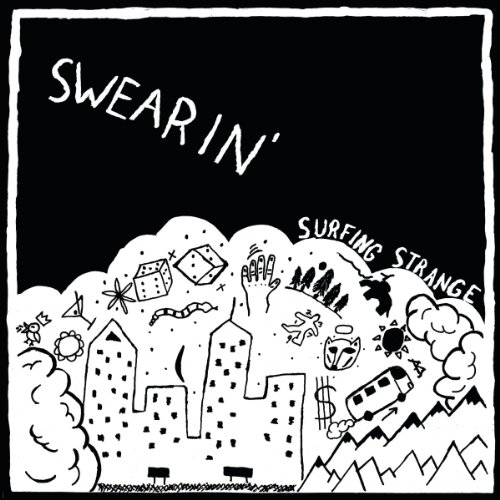 Surfing Strange, the new record by Philadelphia band Swearin’, would probably sound best from behind the sound board at any college radio station in America. I’m pretty sure that despite the demise of actual radio, college radio still exists, as do late night shows spent ordering pizza, writing on the walls of the station, and ignoring drunken call-ins. This is Swearin’s territory, not only because many of the band’s influences (Superchunk, the Breeders) hail from the late-‘80s-early-‘90s heyday of college radio, but also because their music deftly captures that very specific period of life. Surfing Strange is a tight and coherent little album whose greatest strength lies in its youthful energy and sense of the ups and downs of the early twenties—the lows of uncertainty and malaise, and the highs of excitement and anticipation.

Surfing Strange strikes a nice balance in tone, somewhere between upbeat and introspective, but never really maudlin. There are number of different voices here: vocalist/guitarist Allison Crutchfield, the band’s most well-known member and sister of Waxahatchee’s Katie; bassist Keith Spencer, who contributes two middling numbers; and vocalist/guitarist Kyle Gilbride, whose contributions more or less equal Crutchfield’s and who, depending on the song, sounds exactly like a) Doug Martsch, b) Billy Corgan, or c) that guy from the Thrills. Crutchfield is, rightfully, the star of the band, throwing down pathos-laden lead vocals on some of the record’s best tracks, like opener “Dust in the Gold Sack” and the stripped-down “Loretta’s Flowers.” Though Gilbride delivers some highlights as well (particularly “Curdled” and “Echo Locate”), Crutchfield is the only one that makes this band feel truly separate from their influences. And when Gilbride and Crutchfield sing together, as on “Parts of Speech” and “Watered Down,” the songs are better for it.

“Dust in the Gold Sack,” the record’s opening track and first single, sets a very high bar, and what follows, though pleasant and occasionally exhilarating, doesn’t always live up. It begins with an acoustic guitar and a soaring Crutchfield vocal—something about careening over black ice on a dark highway—and instantly gives the impression that something exciting is happening, or about to happen, as distorted guitar surges in, mimicking engine sounds. There’s an urgency to “Dust in the Gold Sack” that wanes throughout the rest of Surfing Strange, particularly on non-starters like “Mermaid” and Spencer’s out-of-place attempt at psych-folk, “Glare of the Sun.” However, some of the record’s ups and downs work as though by design—“Watered Down,” for example, languishes in the type of resigned disappointment that so often follows the promise of excitement: “I was getting lit,” Gilbride sighs, lamenting, “The more I give it time the worse it fits / They water me down.”

These are the kinds of vague epiphanies that Surfing Strange trades in, but they are bolstered so strongly by Crutchfield and Gilbride’s vocals, as well as that irresistibly emo-y guitar, that it’s hard not to feel like you understand. This is particularly true on “Loretta’s Flowers,” the record’s most Waxahatchee-like track, which deals in some of the Crutchfield girls’ favorite subject matter: gently letting down some poor, deluded suitor. “When you get older / You’ll realize this wasn’t love,” she sings softly, adding, “I want to see what insides look like / When they feel the way yours do.”

Brief, piercing moments like those on “Loretta’s Flowers” make Surfing Strange worth loving, particularly for anyone who’s swimming in—or once swam in—the turbulent seas of post-adolescence. This is, after all, sensitive college rock; not a record to change your life, but one to snap easily into it, and one you always seem to hear, perhaps over the airwaves, at just the right time.