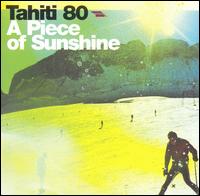 A Piece of Sunshine

Tweet
I know that I want to describe Tahiti 80’s A Little Piece of Sunshine as “musical candy.” What kind of candy, however, I’m not sure. As fluffy as cotton candy – Tahiti 80 are immediately accessible and enjoyable. As challenging as gumdrops – Tahiti 80 want to please your ear, rather than break new ground. Multilayered like Twix bars – Tahiti 80 combine many tasty elements, jammy/noodley guitar parts with bombastic horn-lines with sweeping strings with bleepy electric doodling with nasty bass-lines, into heavenly confections. Perhaps no one candy adequately captures Tahiti 80’s aural deliciousness. Perhaps Tahiti 80 created the musical “super candy:” pure pleasure for the ear and the mind.

Tahiti 80’s not trying to create high art – they strive merely to entertain. However, as far as entertainers go, these guys are masters. Though their songs never run longer than three & a half minutes, they typically pack two or three hooks, two or three rapid mood-swings or theme-changes and multiple layers. As a result, every track is devastatingly catchy and leaves listeners begging for more.

For example, though perfect as is, I’m tempted to write the band and beg them to extend “Listen” into an eight minute pop opus. Traveling through four movements in a mere 3:43, this little gem contains as many ideas as some symphonies. “Antonelli,” another one of the album’s gems, layers extended separate flute and horn themes overtop an uncharacteristically nasty synth bass-line, driving home to an exciting climax. One final example, “Don’t Misunderstand,” swings back and forth between two catchy themes, one composed of strummed acoustic guitar and one composed of dark bouncy electronic elements. The two contrasting ideas, back to back, make this track one of the most interesting pieces on the album.

Tahiti 80’s song-writing strength, their ability to cram loads of delicious flavors and goodies into one candy, fails them on some of these tracks. For instance, the album version of “Heartbeat” pales in comparison to the Japanese release version. They’ve stripped away the layers and the intricacy, leaving the fairly flimsy melody to stand alone. The purely acoustic “1000 Times” strays dangerously close to Dashboard Confessional territory – the hooks are nearly indiscernible and the melody rambles every which way.

Let’s be honest, you bitter and sad (read: fat) indie-kids, who listen to exclusively cut-yourself music, may not immediately warm to Tahiti 80’s sugar pop. With the exception of one or two tracks that explore slightly darker themes, every song here is carefully crafted to make you smile. The result: absolutely shameless, catchy songs that produce the mental image of thin beautiful French people prancing through fields and flowers. Can you handle that much … gayety?