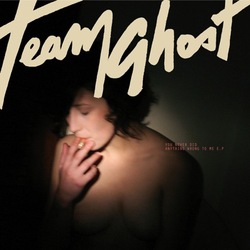 You Never Did Anything Wrong To Me EP

Typically, when major members leave bands there’s some kind of “creative difference” involved or, at least, the escapee just can’t find the effort to make the same music with the same people anymore. The weird thing about M83 is that Anthony Gonzalez and former member Nicolas Fromageau have somehow ended up on the same page despite the fact that their last collaborative album, Dead Cities, Red Seas & Lost Ghosts (2003), is an austere world away from the warm tones and melodramatic singing of their current fare. Whether that has something to do with what brought them together in the first place, or that’s just a matter of recognizing a zeitgeist, it definitely makes for good copy.

You Never Did Anything Wrong To Me, Fromageau’s first release since the aforementioned collaboration, may simply be a bizarro version of the solo-Gonzalez M83 albums, but that’s not necessarily a bad thing. While there’s something comforting about the increasingly arrested adolescence and wide-eyed innocence of Saturdays = Youth (2008), such teenage fetishization can swing a bit closer to the surface creepiness of James “Drunk Girls” Murphy than the real empathy of, say, Morrissey. In other words, no lascivious spreads of Hot Topic Lolitas here (merely what looks like surveillance tape footage of the Tigermilk cover sessions). There’s even a cameo appearance by the old duo’s characteristic shoegaze-y guitar walls on “A Glorious Time.” But mostly the songs benefit from the kind of restraint that has been entirely absent from Gonzalez’s constant rafters-swinging.

Instead of using synth layers for epic swells, Team Ghost refuses any easy payoffs, choosing to circle inward, casting choruses as stubborn punchlines (“as long as I’m deaf”) rather than trampolines. While the groove of a song like “Echoes” may, at the outset, seem a bit too close to Postal Service for comfort, all tinkling chimes and skittering pads, there’s quickly some minor key guitar added, as well as a repeated, plaintive complaint: “You never hear / You never listen / You kept your eyes closed / In the meantime.” Opener “Lonely, Lonely, Lonely” fades in from silence into a lush, nearly drumless instrumental, but the transition is kept stolid.

For all the echoing guitar and bloating arrangements, the record never reaches self-infatuation. Fromageau’s voice stays unreverbed, with just the nattiest hint of an accent; “Colors in time / Fade into grey,” he grits out, and that kind of fatalist sentiment permeates the album. Instead of Sixteen Candles, this could soundtrack some Wong Kar-Wai, romanticism made necessary by melancholy instead of the other way around, pristine keyboards defiantly resisting the downward pull of the lyrics. When the guitars kick in, like on the Isn’t Anything (1988) pulsing of “A Glorious Time” or the nearly punk-rock instrumental “Only You Can Break My Heart,” they’re like a momentary rescinding of the album’s law of contrast, a floating, aggressive happiness totally earned and unhinged, caught once in the former song’s epic coda: “leave it all behind you.”

If anything, You Never Did Anything Wrong To Me could use more moments like that, like that marbling cheesecloth of melody, channeling the nostalgia Fromageau and Gonzalez have become engulfed by without wallowing in it. The record’s success, then, lies in how Team Ghost has inherited the serious, slow-burn energy of the first two M83 albums—instrumentals and vocal samples included (“Sur Nous Les Étincelles Du Soleil”)—while somehow picking up the best parts of everything that’s happened since. It may not be as self-consciously grandiose or confident, but it’s grounded in a way that promises brighter futures than teen angst ever will. Or “Teen Angst” ever will.