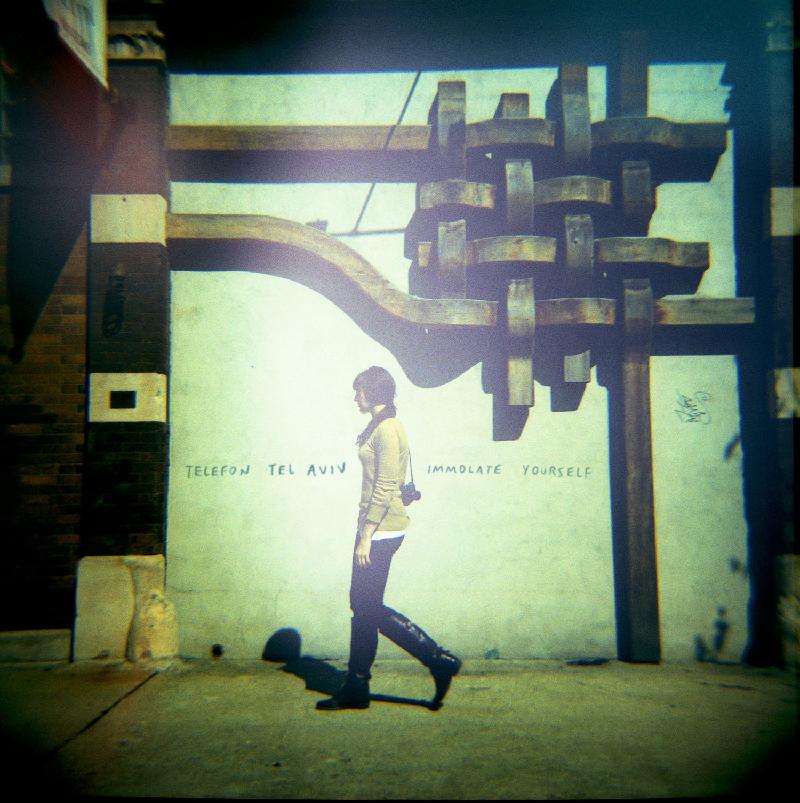 I knew I was out on the wolds and the storm was coming and I had to make a tree for shelter or I would perish in the torrents, while Charlie looked over the brink and considered another way out.
-Joshua Eustis, from the promotional sheet for Immolate Yourself

It’s frustrating to see a promising artist perish when you’re convinced a new level of masterwork was yet to come. Since debuting in 1999 Telefon Tel Aviv have, with some degree of difficulty and deliberation, worked out the kinks in a vision of electronic music that was always conceptually sound but often more muddled in its realization. TTA were good (but not great) at icy, glitch-ridden soundscapes, but showed themselves to be more adept when the technological trickery was scaled back in favor of soft, dark drones and subtler percussion. Immolate Yourself completes this process with frequent vocals and tracks that, more than ever, could be considered songs.

Immolate Yourself still doesn’t quite reach the level of a stunning classic that TTA had in them, but unfortunately it looks like it’s as close as we’ll ever hear. Charlie Cooper, one half of the duo, died suddenly and unexpectedly two days after the album’s release. No word yet on whether surviving member Josh Eustis plans to continue under the Telefon Tel Aviv moniker, but the act as we know it is finished, with the eerily serene and darkly contemplative Immolate Yourself as its last will and testament.

Like contemporary glitch-maker Apparat, who came around to more song-like material on 2007’s Walls, TTA’s metamorphosis comes with a move to BPitch Control (while Walls didn’t come out on BPitch, Apparat’s collaboration with label-head Ellen Allien was a strong influence on his solo progression). The BPitch Control sound is best exemplified by Ellen Allien and AGF, whose records tend towards the blunt surfaces of ambient glitch and emphasize vocals more than their experimental techno contemporaries; the synths are beefier and reverb is applied liberally. It’s further worth noting that Telefon Tel Aviv sound more than ever like a band on Immolate Yourself, and while perhaps the album fails to achieve the same glorious peaks as Map Of What Is Effortless (2004), it is by far the most consistent release from the duo.

Never before have TTA sounded so certain of their direction in music, which makes it ironic that many of the lyrics address doubt and unclear futures. Singles “Helen Of Troy” and “You Are The Worst Thing In The World” suggest tumultuous breakups and obsessive attraction. Both are thrilling winners, “Helen Of Troy” coming from the dream pop album that I wish Erasure would do, and “World” complemented by preceding buildup track “Your Every Idol,” such that the trite lyrics—things going wrong in a relationship, the oldest story in the book—still sound important.

Having ditched their signature obsessive digital signal processing, Telefon Tel Aviv instead introduce more crude analog effects to the fold. Tape delayed drums encircle “Your Every Idol,” which, like an un-quantized sequence, fall just enough out of perfect timing to be beautifully archaic. On “Mostly Translucent” dissonant delay tails and backward string samples metamorphose over four long minutes into a sustained, noisy drone. The percussion is still crisp and snapping from all over the place on tracks like “Stay Away From Being Maybe,” but backwards vocal lines get equal attention this time around.

Another touchstone for Immolate Yourself might be M83. Like Eustis and Cooper, Anthony Gonzales is an electronic performer exploring the human condition with detuned homage to dream-pop acts long gone. While M83 focuses specifically on teenage uncertainty, Telefon Tel Aviv’s lyrics are vague enough to address any age and situation. In a nod to shoegaze much of the vocals are pronounced in the mix, but blurred by layers of synthetic sighs and reverberation to the point of being nearly impossible to understand. It took TTA five years to complete this record, a drawn-out process which resulted in the numb angst felt here. At times there’s some brilliant idea definitely bubbling beneath the surface, but it’s hard for the listener to approach.

Perhaps that difficulty is what makes Charlie Cooper’s untimely death all the more frustrating, as Immolate Yourself feels like a transitional record from an act that was almost ready to make itself crystal clear. There’s kinks in the music and the album suffers a bit from a general overriding slowness, but at the final and title track plays, the metaphor of a phoenix bursting into flame before being reborn from the ashes feels trite yet true. It really is a shame that the story ends here.