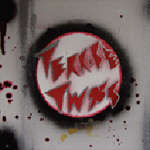 I submit right now that I’m not at all familiar with where the Detroit scene is at right now, or what close and coded backhands pass as scene or secret, and maybe it’s irrelevant anyway. Because, okay, it’s true: Terrible Twos hail from that city, and their frenzied state isn’t exactly atypical, all clash, controversy and, yeah, guitar. Their sound is underground only insomuch as it’s rigorously uncommercial. It has angles and corkscrews and fine young fuck-all bravado. The innocence of the thing almost kills me. There are no true guitar solos, no cameos from Jack White, and at no point does this sound like anything other than a bunch of dudes with nothing else to do.

Point being that this undead strut of a record slays. It roars savage like we didn’t all just finish hearing retro disappear up its own asshole. And getting at the brittle bones of these songs, these loud and breaking things, you start to see the real source of all this fuss. Terrible Twos is, no shit, a band on the run. Their eponymous debut is at its blustering core runaway rock. It’s delinquent and messy, sure, but its real menace is in the dynamics: all disembodied Costello keys and bawlsome takes on tthe corpse of the Misfits. As a broadside and a salvo and general enfilade of white-hot eruption, it is singular and masterful. It is perhaps only equalled in the last coupla years by Tiger Bear Wolf. Which, if you’ll recall, was like this wicked amazing record that lots of otherwise good people slept on.

Let’s not sleep on Terrible Twos. Because this just about lays down the gauntlet for forward-thinking rock: it’s clever, concise, and wildly uneven. It careens, right, but its real slant is territorial. It careers out of self-consciousness and out of impulse. “Chinky Glass Eye” cuts straight through decades-old cliché: this isn’t so much rock on the fringe as it is rock-on-edge—re-imagined and ontologically impaled. Welcome to Detroit’s post-hype cataclysm. Nothing else is needed; it kinda makes one scared for Sufjan.

The latch-key on my claim, though, is the forward part: songs like “Rebel ReRun” and “Older Girls” don’t pat and play out, they falcon-shit squalls into fiery tumblers and set colossal hooks into destructive orbit. Everything, somehow, gains clarity from this reduction. The production nails it in terms of fleshing out these instruments: the mongoloid guitars and palpitating drum lines that come clear-out in stereo but dissolve, ratchet-decibelled, into interdependent volatility. You have to hand it to the Twos—the skull-searing breakdowns and prog-thrash chaos that skewers “An Image Break” could have landed a mess. But this is some fixed-format set of wall-crashing animosity. Its ferocity is unvarying, steady, expert. The band kicks out the jams till it’s almost tripping over its own tropes.

Which is sort of the point. For all their noise and dissonance, the Twos really eschew the passivity of art damaged in favour of an all-out truck-job on our career sovereigns. Rolling in like both Elvises didn’t croak. And they do it all: screws-loose whimsy (“Tuning Song”) to more recognisable models (“Fat Cats”), all superanimated by their chaotic dynamic.

And I know this is starting to sound all abstract and vague. I’m paying a heavy price for my ignorance but, like I’ve said, I love this record. What else can I say? It’s like you spend long enough listening to something only to find your writing gross-inflated and tired-out. It becomes like hitting the brick wall is the point. If terminal exhaustion is the goal, then Terrible Twos has its concept down low—there’s nothing much to sit on, no honest reference points to comfortably lean against, just the sharp side of the moment and a constant push to flaming first contact. It’s maybe the best thing I’ve heard this year. I really think you should listen to it.