Other Records by The Futureheads 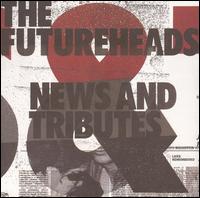 As the year in music approaches its midway point (and really, thanks to the marvel of internet leaks, we’re effectively most of the way through August), I can’t help but feel a little disenchanted. Sure, 2006 has provided a generous handful of solid offerings, a few that flirt with greatness; but really, I’ve yet to come across a record this year that really felt transcendental the way that a good many did last year. Sure, I love Boris or The Figurines or Tapes ‘N Tapes as much as the next guy, but it isn’t stuff I could honestly see myself listening to in five, or hell, maybe even one year’s time. What’s been the worst for me, I think, is that so many of the records I’d been eagerly anticipating for months (like The Walkmen, The Strokes, Built to Spill, The Streets, etc.) turned out to be duds; not even spectacular, Rehearsing My Choir-level disasters, but instead either decent but easily forgettable laurel-resting or lukewarm attempts at progression by bands who’d forgotten how to play to their own strengths.

And the first time through, News and Tributes, the much-hyped sophomore release from The Futureheads, sounded like the worst offender of the bunch: a dreary, wooden bid for mainstream attention that fell prey to both of the aforementioned prototypes at once. The album largely eschews the mile-a-minute hooks and frenzied tempos of their eponymous debut in favour of more subdued (relatively speaking) single-ready material that sheds a little more light on frontman Barry Hyde’s witty songwriting. News and Tributes does lack the visceral immediacy of its predecessor, and is a significant if subtle departure for the band, so it would be hard for anyone who fell in love with their debut to embrace it immediately. But, given time, the record gets under your skin in slow and somewhat surprising ways, eventually coming off sounding like a very good transitional album by a group with a whole lot more staying power than most would have credited them with two years ago.

News and Tributes finds a more seriously minded band than the sardonic Futureheads of old. The anthemic and slightly bombastic opener “Yes/No” bursts out the gate with earnestly-delivered gems such as “my advice goes as follows / go home, brick yourself in / think about it properly go back to the beginning,” before heatedly reciting the oblique song title for the chorus. What follows isn’t generally as unusual: the album features a trio of very strong, radio-ready (well, at least in Britain) songs that are as hook-heavy as anything else in their catalogue, but take a little bit more time feeling themselves out. “Fallout,” maybe the album’s biggest standout, betrays the melancholy tone of its melody and subject matter (As I read it, how volatile relationships tend to isolate people from the world around them) with typically great, sugar-sweet harmonies and infectious handclaps.

“Back to the Sea,” perhaps the most mainstream-sounding song on the record, recalls early U2, albeit with better harmonies and unexpected tempo shifts. First single “Skip to the End,” an immensely likeable three-minute blast of sunshine with Hyde offering an almost profound reading of the beginning of relationships (the inevitable desire to “skip to the end” to see if becoming attached to a new person will culminate in bliss or emotional disaster) is one of the most clever in a catalogue of extremely clever songs, and would eat the North American rock charts alive if there were any justice. From there, the band segues into two songs that could quite accurately be called ballads: the brooding and kind of dull “Burnt”, and the much more engaging title track, in which Hyde quite poignantly mourns the victims of the 1958 Munich air disaster.

The second half is a bit more of a mixed bag, but remains fairly consistent. Aside from the aforementioned “Back to the Sea,” there’s the aptly-titled “Return of the Berserker,” the album’s lone moment of out-and-out rawk, and the slyly Beach Boys-aping “Thursday,” which ends up being yet another pretty successful experimental, buoyed by the band’s predictably awesome harmonies. If other songs like the meandering “Worry About it Later” and the lightweight “Favours for Favours” fall a little flat, the others, including the pretty stellar closer “Face” are more than ready to pick up the slack.

So basically, if you can get over the fact that Hyde and co. are a little more eager for mainstream love (and at the same time, to separate themselves from the Franz Ferdinands and Kaiser Chiefs of the world who’ve already experienced it), and will probably never record something as life-affirming as “Hounds of Love” or jubilantly fun as “Decent Days and Nights” or as nutty as “Robot,” there’s an awful lot of good stuff to be found on News and Tributes. It’s the sound of a band trying, albeit conservatively, to redefine themselves and sound a little bit more “important,” for good or ill. And if the band’s hooks can keep up with their ambition and Hyde’s sterling songwriting, there’s good reason to expect even better things from them next time around.