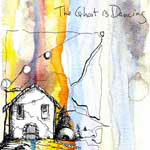 Tweet
In every way imaginable, Toronto’s The Ghost is Dancing is a typical Canadian indie rock band. They’re a dual-gender seven-piece with at least one (now ex-) member who moonlights in a noise rock collective. They play ornate, emotionally-charged pop with the kind of desolate urgency their peers have become known for. They sent me their promo CD in adorable Christmas wrapping, personalized tag (“from Santa,” naturally) and all. Their website even offers up any member of the band as a free prom date (provided you live in the Toronto area), and their biography details an amusing time-travel story claiming that the band was originally formed in 2009.

While this kind of inclusive, artful love-in has worked in the favour of dozens of bands before them, it’s precisely the failing of their self-titled, self-released debut EP, a record that’s well intentioned but ultimately redundant. It's the work of a band who badly wants their music to mean as much to people as The Arcade Fire or Neutral Milk Hotel mean to them, but who lacks the experience or attention to detail to give it that sort of edge.

Perhaps not surprisingly, much of the record plays like an inferior version of the Arcade Fire EP; dynamic but somewhat lo-fi arrangements topped off with catchy organ hooks and emotive vocals. Opener “To French Ave.” begins with a hushed full-band chant (beautifully detailing a small-town apocalypse, though you’d have to hunt down a lyric sheet to have any idea) over descending major chords, over which lead vocalist Jim DeLuca passionately interjects, “I fell for you hard! / I fell like a child!” It’s arguably the best song here, but as with much of the rest, it suffers from its shoddy mixing, with DeLuca overwhelming some of the band’s best lyrics with some of its worst.

The arrangement problems don’t end there. Too many of TGiD’s tracks reach very abrupt climaxes that, while quite invigorating on their own, feel poorly introduced or even tagged on. “People” and “The City Waltz” both suffer from this same failing, and while the latter is redeemed by manic ranting and some impressive guitar work, the former ends with the annoyingly meaningless mantra of “people are people on planets,” an irritation duplicated with closing track “Organ‘s” repeated declaration of “we are inside of you / until the fire ends.”

Still, there’s a great deal of potential to be found amongst The Ghost is Dancing’s five tracks. Drummer Kevin Corlis keeps many of the weaker songs afloat with inventive rapid-fire marching band-like rhythms, and the band has a tangible rapport with each other that’s obviously a boon to any group of touring musicians. Still, without a good producer to force them out of the shadow of their influences or give their music the kind of catharsis it’s looking for, The Ghost is Dancing ends up sounding a little generic. Here’s hoping they can get over their growing pains for the full-length.