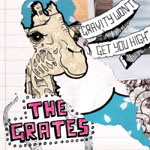 Gravity Won't Get You High

Tweet
And so the post-Strokes New York barrel-scraping search for anything and everything that sounds remotely reminiscent of clean guitar tones and a calculatedly scruffy look has spread its scope to reach Brisbane, Australia. The copycats have sprung copycats, and while I’m usually one to welcome emulation (if a band copies something I enjoy, why would I object?), does The Grates’ primary appeal -- that singer Patient Hodgeson’s voice shares a passing resemblance to the Yeah Yeah Yeahs’ Karen O, and Gravity Won’t Get You High to this year’s rock-heavy Show Your Bones -- sound like something that anyone actually needs to hear?

If outright and skillful homage or coincidental resemblance to New York darlings were all there was to The Grates, then at least we’d have clear criteria with which to judge the success of the album, only a few points docked here or there for lack of originality. The problem with The Grates is that at least one of their three members always remembers to bring respectable, if not interesting songwriting ideas back to juvenile, overbearing, irritating silliness that almost immediately forgoes connection with the listener for a mixed bag of adolescent jokes and rock-out posture. “Inside Outside” is of The Presidents of the United States’ pedigree -- one half-step above “wacky” by virtue of its occasional hook, but only a full step above transparent comedy with its refrain “Some motherfuckers think they’re born to dance.” I’ll admit that making an indie kid laugh is the brain surgery of music, much harder than making said listener believe in one’s affection for rock n’ roll. But what’s unfortunate is that even when The Grates fail to generate laughs, they do so in a completely redundant and uninteresting way. “Sukkafish,” which could be an early-nineties band name in itself, introduces a surprisingly pleasant banjo tangle to complement Hodgeson’s first genuinely supreme melody, but a boring three-chord chorus, draped ceremoniously in immediately recognizable grunge distortion, quickly quashes it.

“Nothing Sir” is representative of at least half of the album’s most glaring flaw; opening with a simple circus-waltz beat while Hodgeson suggests she’ll use her hairdryer to “blow all the grey clouds away,” the song is insipid and, beneath Brian Deck’s competent production (Modest Mouse, Tortoise, The Sea and Cake, Iron & Wine, Secret Machines), is largely comprised of three-chord / two-chord rock. “Little People” and first single “Science is Golden” tie each other in their bid to represent the other half of the album and what many will consider its primary strength: power-pop whose “natural” production values just barely mask what is standard fare in a market where indie has become a viable commodity. The Grates may not have the self-seriousness of a Lindsay Lohan trying her hand at music, but the quality of Gravity Won’t Get You High’s songwriting actually struggles to reach that level. At least Lohan had the benefit of experienced pop studio musicians and songwriters and only had to manufacture presence.

Still, the album’s first half is marginally better for Hodgeson’s decision to sing about something (please, anything) and that the band refrains from painting outside the borders of its limited canvas. “Trampoline” supposes its namesake an apt metaphor for sex (it takes Hodgeson “higher,” which I suppose will do given the album’s many frittered away salvos) and “Howl” is a lucrative pop-punk relationship between Hodgeson’s thankfully open lyrical thread, unobscured by the mask of slapstick, and John Pattersons’ gradually-emerging guitar dynamics (much welcome at this point of the album, what with its prior insistence on bar chord monotony). “Rock Boys,” “19-20-20,” and “Lies are Much More Fun” pilfer early-nineties, punk-infused guitar and pubescent, sing-song hooks in a seemingly less intended manner than the album’s torpid second half; they more fully justify the Yeah Yeah Yeahs comparisons, if not the album’s value. Patience Hodgeson’s voice comes closest to Karen O’s on closer “I am Siam,” but is only about as close to O’s venerable screech as to 4 Non Blondes’ Linda Perry’s during said travesty’s canonical “What’s Up?” Unlike the YYYs, the band is making such unremarkable grunge-lite pop that enjoyment of the album hinges on Hodgeson’s simulated profundity. At least on “I am Siam” it dissolves with the rest of the music into unintelligible fuzz, a calculated cover-up of the fact that the band never bothered to write an end to the song. Strangely, at only a minute and a half in length, the flitting and pretty vocal warble of opening number “I Won’t Survive” is probably the band’s most premeditated joke, but it’s also, ironically, Hodgeson’s most original melody, marred only by the double downstroke of Patterson’s intrusive guitar plodding.

Really, the album’s title says it all: clever in a “huh” kind of way, The Grates’ self-satisfaction at their own sense of humor may elevate this unexceptional, anachronistic collection of two-dimensional, nineties ideas above an album with similarly unexceptional lyrics, but after only a few listens you’ll find it no more endearing or hilarious than you do any person who resorts to prepubescence for yuks.