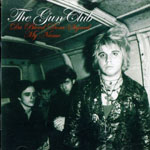 Tweet
The winter clinch is squeezing over in England. I live by the river so there's that extra mortifying lick to the wind that makes the walk into work more hunched and brittle. Sometimes it feels so cold it's hard to keep a bead on the path ahead, so autopilot is the only option, eyes on the flagstones, each one following the other, their seams a breadcrumb trail towards that warm office. For the last couple of weeks I've blotted out that icicle bite with a mixture of the comfortingly traditional and the scatological in the shape of a sweet tea beforehand and Da Blood Done Signed My Name as my walking companion.

The Gun Club were always a band haunted by uncomfortable demons, mauled by the wild dogs of racism and abuse. It's unfortunate that a band that had such a natural understanding of the suffering heart of blues had to scrape its flesh narcissistically over the elements that played such a definitive part in bringing about its creation in the first place. They seemed to take pleasure in throwing around racial epithets and allusions to addiction. Having such a bleached and primped mouthpiece as Jeffrey Lee Pierce didn't help either. You couldn't help but feel there was an element of emotional tourism at play, particularly in relation to race.

It's difficult to fully absolve the Gun Club. There's definitely an urge to castigate them for the imagery they played so freely with. Whether they have the artistic freedom to turn in a version of "Strange Fruit" like the live one included here is more easy to defend, a version that breaks the melody of the original, suggesting the horror of the lyrics in strobe light flashes and doing so effectively, its sense of stony detachment a leering proof of its validity. More uncomfortable, though, are early demos like "The Devil & The Nigger," where the titular epithet is used to the point of fetishization. It takes the idea of the black man as a simple cursed construct, a byword for the doomed, which is dangerously pious territory for any band who simply trade on a viewpoint they "imagine" they relate with or purport to understand. It stands on the same crumbling pillar that Patti Smith did when she recorded "Rock n Roll Nigger," but where Patti had a greater scope for intellectual involvement, the Gun Club were cut adrift by their sneering disrespect. Is it enough to assert that you're doing it with the best of intentions while simultaneously ripping that song with a sense of unfettered rock & roll exhilaration? I want to believe that these songs contain more than the simple glee of fucking with taboos, the degree of discomfort they bring serving to highlight the unpalatability of their content.

The Gun Club defend their intentions in the additional interview with Non Plus tacked onto the end of this set, but what they say remains unconvincing, giving little detailed explanation of their lyrics above them being reliant on the context of the song and the album. The issue of the Gun Club's intentions has always been a contentious one; I think they were reckless and guilty of taking the gravity of their subject matter too lightly regardless of how much of what they presented was supposed to be in character. There is a sense that every screw they turned uncomfortably was feeding into the terror of their subject matter, that it was all for the cause of atmosphere and wasn't intended to relate a personal standpoint, but it's a thorny piece of interpretation. You're still left with the urge to retch.

It's a shame that their motives weren't exactly clear because their earliest period was filled with an absolutely cataclysmic conjunction of blues and punk fury. Their scabrous take on traditional American music extended to taking the basic structures and (in their own words) "making a racket." But what a racket: the version of "Sex Beat" included in the 1982 live set here is incendiary, sour sexuality immolated in gravel and gasoline, Pierce sounding truly animalistic in his whooped exhortations, the band eviscerating the ghost of Link Wray in a rumbling cavalcade. The Gun Club's treatment of sex, like most subjects they tackled, tended to have a fatalistic touch, consisting of vicious ravages taking place beneath Christmas trees, linking sex with death in an inescapable rapturous pact. It fed into everything they touched. The gun was an engorged organ, the noose an erotic extension, which again made some of their imagery contentious, exposing and transposing the stately bodies of Blues and Country with immoral hands. All of this was actually more in line with the bare sensibilities of both genres, but it still seemed like a violation of their virtue because it was delivered with an air of licentious arrogance.

Pierce had a particular love of classic blues, drawing from it a sense of chalk dry suffering. His devotion is represented here by an acoustic reading of Tommy Johnson's "Cool Drink Of Water Blues" and two electric versions of Robert Johnson's "Preaching The Blues." While the Johnson cover is a respectful meditation, the versions of "Preaching The Blues" are molestations, the drum track a clicking train track surprised by a tumbling guitar landslide that buries Pierce alive with his words: "Blues, is low down shaking chill / You ain't never had them, I don't believe you will." The studio take is as malevolent a reading as I've heard from the Gun Club, even matching the hotwired Fire Of Love (1982) cut. It's important to note that when they chose to burn these songs alive there was always a respectful spirit. This wasn't an attempt to destroy or deconstruct the old order; it was derived more from a desire to stoke their embers and enrage the torment lying dormant in the sparse bones of the originals.

This is a disjointed set, something for the previously initiated fan which essentially attempts to fill in some of the grey areas of the Gun Club's early years. Listeners new to their discography should head directly for Fire Of Love (1982) for the pure distillation of their craft. Still, the first steps and influences are vital because they demonstrate the contradictory nature of Pierce's vision. He could be reverent and disrespectful in the same breath, delivering a troubled knot that still causes problems to anyone working to unravel its purpose. It would be valid and defendable to come down on either side of the argument surrounding their motives. It's a question I always struggle with whenever I press play. As a wailing celebration of pain and irresponsibility it is devastatingly effective and does deliver on its promise to take you to the end of the night, but its barbed teeth are an uncomfortable travelling partner. You have to decide whether you can justify the journey to yourself.