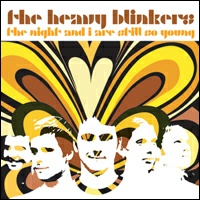 The opening trio of Heavy Blinkers tracks, only one of which being from their upcoming full length The Night and I Are Still So Young, the other two being exclusive to this release, are nice enough but are far from the best they have to offer. That said, “Maplewood” and “Tribute to Sparrow” sound like logical extensions of the Brian Wilson influenced sound they’ve been developing since their debut and though they lack the immediacy found on their best tracks like “Rise and Glide” (from their excellent self-titled record), “Helicopter Blues” and “I Used to Be a Design” (both from their previous album, Better Weather, which remains one of the maritimes’ best kept secrets) the mesmerizing attention to production detail helps to make up for the lack of memorable melodies. “Tribute to Sparrow” is especially effective and probably should’ve replaced “Try Telling That To My Baby” on Night‘s line-up. The last Blinkers track, “Veranda Celeste,” is a short High Llamas-esque (not surprisingly, O’Hagan has been vocal about his admiration for this group) instrumental that’s far from terrible, but makes little sense on a split EP like this, especially as the sole selection from Night; the stunning title track or “In the Morning” would’ve made far more sense.