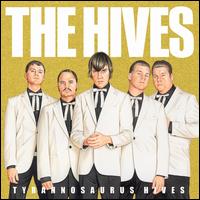 For those who are au courant as regards affairs of paleontology (I know there are millions of you), increasing evidence suggests that the T. Rex was not the ferocious ruler of the plains that Jurassic Park brought to life. Instead, everything from Rex’s powerful sense of smell, to its built-for-walking legs, to it's measly arms, to a lack of fossil evidence of T. Rexes actually killing anything, suggests a scavenger-dino that occasionally killed on its own. It wasn't so fearsome at all.

And while they would have you think otherwise, neither are the Hives. In fact, perhaps one of the most endearing things about the group is that their almost parodic self-aggrandizement is merely a front for a band that just loves the old-school shit and wants to rawk with abandon.

The title-fit, then, is ironic. The Hives certainly meant to communicate that they are the thundering beasts of the rock world; but the actuality, which coincides unexpectedly well with the new findings about T. Rex-proper, is that they scavenge off of classic acts, occasionally pulling out some of their own killer tricks.

For all the influence-scavenging, attitude, and image-building the band does, Tyrannosaurus Hives is an album that’s more risky and ambitious than its predecessor. On Veni Vidi Vicious, the Hives secured a style defined in part by the unwieldy wail of Howlin’ Pelle Almqvist; it was easy to recognize the sound of this white-suited posse, whose brains might've been replaced with an extra set of testicles. The band’s range was almost calculatingly narrow, yielding a few crotch-kicks like “Die, Alright,” and “Supply and Demand,” and then a whole lot of similar sounding tracks.

Tyrannousaurus Hives is by comparison madly eclectic, poking beyond the boundaries of garage into power-pop and even baroque rock. I mean, feel free to yawn your Buzzcocks and Stooges references. But on brash, strutting first single “Walk, Idiot, Walk,” the chord progressions bear more than a touch of The Stones as well. Meanwhile, they work off of Ramones bass work and slappy guitar on “Dead Quote Olympics,” with the band even adopting a Ramones vocal style.

But if you want incontrovertible evidence of the band’s willingness to dip their sleek white shoes into new baby-pools, look no farther than “Diabolic Schemes,” whose waltz-ish drumming is deftly accentuated by the band’s use of fucking strings. It’s also one of the few songs on the album that doesn’t beg a name-drop. Almqvist, whose yawps don’t show up nearly as much on T. Hives as on Veni, does gritty vocal somersaults that Mick Jagger might’ve tried to pull in younger days, while a bluesy solo from Chris Dangerous provides a final uncharacteristic embellishment. For a group that tends to engineer every ounce of amp-power culled from bass and guitars to form single, flattening hooks, it’s a gutsy track.

Speaking of hooks, T. Hives still packs enough explosive ones to blow Sweden clear off the map (you know, again). Whether it’s the 70’s anthemic chords that fuel the magnificent hook to “Walk Idiot Walk,” or the whipping, bouncy chord progression behind the two head-bobbing hooks on “Antidote,” The Hives can’t seem to take a step without running into an inspired (or at least thieved) hook.

The Swedes have other improvements to bring to their already monstrous arsenal. For all the bluesy undercurrents to T. Hives, their bass work finally does at least a little more than add extra meat to the already ham-fisted, pounding hooks like the ones on Veni. On “Missing Link” the bass work is positively creative, serving as a needed counterpoint to sustained, two-to-three-chord guitar duels.

The problems with T. Hives are almost disappointingly few, but your new favorite band does have them. First, on occasion The Hives string together some fairly impressive hooks, only to forget to bridge or connect the one to the other. “A Little More for Little You” has two smart power-pop hooks to make your mamma proud, but they have only the key from which they’re both derived in common. That is, The Hives on occasion find themselves having pieced together some clever ideas only to remember they’d forgotten the glue. Second, the rare track like “No Pun Intended,” simply lacks any zestful hooks, period, omitting the single anchoring element to a band that has no compunction wearing absurd white suits. And lastly, the almost utter lack of originality to the album doesn’t always hurt it, but obviously never helps, either.

Still, the gumption behind T. Hives is enough to make it a worthwhile, if unchallenging, listen. The album is home to more hits than misses, and some absolutely lethal chunks of rawk (see: “Walk Idiot Walk” and “Antidote,” with its whimsical vocal hook). It’s in almost every way an improvement on Veni, and I’m just as surprised as you are that the Hives could make this kind of album to catapult them safely out of the pits of U.S. novelty and into the arms of some supermodel or another. In a few words, it’s simply an impressive feat, so I’ll give credit where credit’s due.

It’s just a shame, because I had the best extinction joke planned as a closer to smack around these dandies---that is, before I actually listened to Tyrannosaurus Hives. And you’ll never get to hear it, because, despite my skepticism, The Hives made me believe, for at least a few minutes at a time, that they were my new favorite band. Seems to me like extinction is a long ways away.