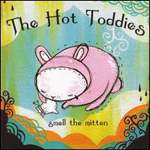 All relevant signs -- twee album art, a precious band name, '60s girl-group posturing -- suggest the Hot Toddies are out to kill us with cuteness, but beneath the outer layers of doo-wop, Beach Boys fanaticism, and a commitment to the tried and true practice of California beach carefree shenanigans, there is a kick-ass no-frills rock band at the heart of this San Francisco four-piece. In appropriate Bay Area fashion, the band formed with fun-seeking whimsy, going as far as to bring on non-drummer Sylvia Hurtado, because "[they] just knew she was a Toddy," and reluctant keyboardist Jessica Wright, who admittedly had less experience with the instrument than fronters Heidi Bodeson (guitar) and Erin Skidmore (bass); the band's sheer will to have a good time both defines their music and provides a point from which to spin out safely. Their most striking feature, after all, is immediate accessibility.

Bodeson and Skidmore's vocals strike up irresistible harmonies and the band grooves as one: on one hand these retro tendencies seem more like copycat adoration than channeled inspiration, but then again, there's no fighting the urge to dance and sing along to the Farfisa organ licks and '60s backbeat of "Surf Song." The lyrics kick in ("Bonfire on the beach, whoa! / Pacifico and some mushroom tea, whoa! / Dude I must be tripping / Is that Brian Wilson up on the hill?") and carry you away for a welcome left coast BBQ with a young Sally Field and sand comfortably in one's underwear. Of course, the band continues to riff off their sunshine foundations with tracks like "What's Your Sign?" and "Motorscooter," but elsewhere the Hot Toddies begin to translate influences both eclectic and haphazard by mixing those girl-group harmonies with distortion-heavy, almost proto-punk arrangements. The fusion is perfect on "Photosynthesis," pairing lyrics right out of some lost PBS children's edutainment program with a beat vicious enough to hang with the Pixies. And "Rocker Girl" is just one big dirty Stooges jam save for an a-cappella bridge in which the ladies nail a harmony that could have been off a '70s Yes vocal breakdown.

Despite the album's gleeful charm, I do think the Hot Toddies are selling themselves a bit short on the lyrical front. When they put their minds to it, they are actually quite capable of lining up their indie-pop with witty and insightful lyrics (as opposed to the obvious opposite). A song like the online romance tale "HTML" is not only hilarious but also considers the inherent creepiness of the Internet when a wayward teenager goes looking for love online and gets her heart let down:

I typed OMG, should be you and me
You wrote LOL, wrote LOL
My browser froze right down to my toes,
I said go to hell

You'd have to be a big lump of granite to not crack at least one smile and let yourself go all the way with smelling these sugary-ass mittens. But maybe I'm also hoping the Hot Toddies will lean a little less on their influences the next time around and let their beach-front property harmonies explore more of those inland garage rock tendencies. Am I asking too much, attempting to ruin a recipe that ain't broke? Will all of my demands for them to step up a modicum of seriousness just make the music suck? Oh bands, those silly plans! Forget it, I'm throwing in the towel for the day: I would rather hit up the N-Judah and ride straight out to Ocean Beach for a bonfire on the Pacific. Holler, m'Toddies, where's my shroom tea at?