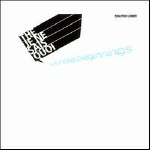 Just when you finally thought, and probably hoped, that you'd never hear the word "angular" abused by a critic again --- after all, the post-punks of 2004 were rather scant in comparison to 2003 --- here come The Je Ne Sais Quoi guitars a-janglin' and a-stabbin' all angular-like. Mix in a few kickin' bass lines, some frenetic vocals, and delightful drumming, and you've got one of the best albums to be missed on so many 2004 year-end lists.

When the group shouts, on opener "Weekdays," "I need a match to find a spark," they don't just find a spark; they find a blaze, and for just about every second of We Make Beginnings, it roars with riffs and energy. Whether it's their incendiary guitar leads, call-and-response vocals, or chunks of melody, The Je Ne Sais Quoi take on every element of their sharp-as-daggers mix with gleeful zest.

Nor do they let that zest push them into excess; "Weekdays" is duck's-ass-tight, building from its organ hooks into raging choruses before breaking down into a brief, nicely interwoven bass and guitar duel. "We Make Beginnings" swaggers about on a thick bass/guitar riff, and then uses slap bass to anchor the group's martial commands, "Put me in a hearse / Speak to me words / that curse," before tackling a complex melody. Ultimately, like a number of the songs on We Make Beginnings, it ends with terrific guitar mess-arounds that serve as a smart counterpoint to the group's precise arrangements.

It all culminates in what easily ranks as one of the best songs of last year: "2004," whose deep-grooved bass line leads into artfully delicate drumming, and thence into some stunning melodic guitar figures. Saving their best trick for last, the group unleashes a final guitar attack that recalls Sonic Youth's keen balance of noise and guitar pyrotechnics, and finish on a somber note, "Miss J" morosely crooning, "The beautiful people that I know / Make me run all the way home." What stands out so sharply about this Stockholm gang of janglers and clangers is the sheer confidence that shines through this expertly executed debut; this is a band so comfortable with their ass-kicking ethic that they ought to be your new favorite band. Forget those other Swedes.