Other Records by The Ladies 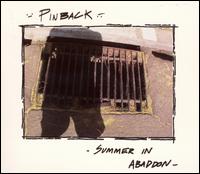 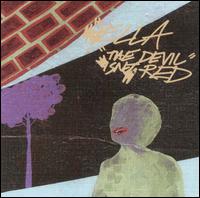 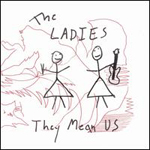 Tweet
Sometimes I look back at old reviews I’ve written and wonder what the fuck I was smoking when I wrote some of that shit. Example 1a: my dissing of the last Pinback record, Summer in Abaddon. Well, I didn’t so much dis it as “meh” it, which is probably worse; Pinback is a band that’s worth more than an apathetic shrug. When I go back to that record and listen now I’m consistently engaged and impressed by the band’s song-writing sensibility and tight instrumentation. It’s an album far more worthy of revisiting than some of the other stuff I’ve rated more highly. Ah well.

All that brings us to Pinback leader Rob Crow’s newest endeavor, The Ladies -- a band formed with Hella’s whacky drummer Zach Hill. And it turns out that the simplest explanation of the album is also the most accurate; the band is essentially Pinback-meets-Hella. Present from Pinback are Crow’s catchy, melodic guitar compositions and subdued vocals, and Hill brings his mile-a-minute drumming over from Hella. What’s perhaps shocking is how seamlessly the two disparate halves mesh.

Crow has clearly loosened his normally tight grip on the direction and dynamics of his songs, perhaps inspired by Hill’s more free-form drumming. I’m not sure if it’s fair to call it an improvement on his work with Pinback, but it’s definitely an interesting change of pace with Hill’s psychotic kit powering his songs. Meanwhile, Hill, always an impressive drummer (though I’m one of those people who tends to admire Hella more than actually listen to them), benefits from the more structured environment Crow’s songs provide. Given a more traditional pop template to work with, Hill shines, as he fracturing and dementing Crow’s aching guitar-work. The two are such accomplished musicians that the lack of other instrumentation on the album rarely becomes a problem; the interplay of their two instruments is consistently wowing.

“Black Caesar/Red Sonja” starts things with a chugging power-pop guitar and cascading drums, a short call to arms buoyed by an explosive drum solo from Hill in its mid-section. “Vacation, Asphyxia, Vacation” treads into more familiar Pinback territory as Crow’s undulating guitar leads into the sort of understated, bittersweet mini-epic that littered Abaddon. “Empathy On a Stick” finds a sort of medium between the laidback feel of Crow’s Pinback material and the power-pop of “Black Caesar/Red Sonja” as his twittering guitar lines are matched by Hill’s restrained tom-spattering percussion.

Hill’s restraint is one of the reasons the album is able to succeed as well as it does. I’ve always thought of him as a show-y drummer who was more interested in demonstrating his chops than supporting a song. But he sacrifices his typical cacophony time and again on the record, toning down the volume, stuttering instead of hammering, to match Crow’s subdued vocals and wisely using his freakouts only in service of the song. One prime example of this is blistering “And Them.” While maintaining his trademarked speed, as he rides high-hats through the verse, he pummels in the chorus, changes time signatures and then relents again. Same with"Non-threatening," where subtle changes in his constant jitter are as key to the song working as Crow's substantial hook. It’s a far more effective and bewildering effect than his full-on assault I’ve heard on Hella records.

The album ends with the 12-minute tour de force “Mandatory Psycho-Freakout.” Predominantly an extended experimental, it’s by no stretch boring as it’s a showcase for both Crow’s guitar and Hill’s varied drumming. The song bubbles and morphs, sounding like a Nirvana b-side before exploding to a kind of stripped-down Vision Creation Newsun-era Boredoms freakout and back again.

In the end, They Mean Us is a solid album that succeeds because it is able to find a healthy balance between off-kilter instrumentation and solid songwriting. The album is so densely packed with melodic and percussive interplay that seems to almost overwhelm the songs at times, but nonetheless is an addictive listen.

For the record: Summer in Abaddon shoulda been an 82. My bad.