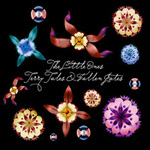 Terry Tales & Fallen Gates is the Toys ‘R Us from hell: bright and cheery from the parking lot but inside all the toys are caked with dust, there are hypodermic needles in the stuffed animals’ arms, and all the clerks are assholes. Of course, the target demographic isn’t so much bed-wetting youngsters as people who wet themselves at the mention of the Brian Wilson, and this little consumer analogy isn’t meant to imply there’s a layer of cynicism below the Little Ones’ cheery outlook, just that the depth of this offering is thinner than the layer of metallic paint the band slathers over every song here.

Opener “Tallies” wallops the listener in the face like an unwelcome jack-in-the-box with an inane guitar line atop a runaway organ, Edward Nolan Reye’s generic vocals imploring smiles and barbeques but coming up empty-handed. While the track’s only offense is being somewhat stale and innocuous, “Boracay,” which follows, sports a series of utterly obnoxious chants (“Ay / What they say / What they say / What they say”) and a steel drum (It’s Caribbean! Beaches! Get it?!). Deft lyricism isn’t a must in this particular sort of amiable pop, but mustering something beyond “insultingly simple” would be nice.

My curmudgeonly criticisms could give the impression that this collection makes me all red-faced and spiteful, that I would bow before EMI for actually dropping a band that deserved it, but it’s ultimately just an effort that lacks tremendously in anything interesting from a band that has not yet found a voice of their own and does not seem to understand the value of variation (even at nineteen minutes, the EP drags due to the similarity of the tracks and its clumsy pacing). Terry Tales does not offend so much as it bores because of artificiality. Except for the steel drums. The drums are brutal.

The comparison, sonically speaking, isn’t terribly accurate, but Terry Tales recalls Akron/Family’s half of Akron/Family & Angels of Light (2005) in that it seems to be attempting to capture the sheer, unadulterated joyousness of that record. But the pure mirth exhibited on that record was derived from an impossibly rich sonic palette and an inimitability that the Little Ones simply do not possess at this point. Akron/Family is a band that wears it influences squarely on their sleeves but finds a way to gather pieces from those outfits, creating a distinct niche for itself; Little Ones seem to cobble together influences into some ugly macaroni portrait, underdeveloped and bland. Like Akron, the band’s not shy about exposing their sleeves, heavily applying sunshine wherever creativity or spontaneity are not present, which, much to their detriment, is all over the fucking place.

It’s apparent that the Little Ones spent their adolescences with the Zombies, the Beach Boys, and their ilk, but it’s also painfully apparent that they should spend more time examining what made those records great (wonderfully inventive melodies and gorgeous vocal harmonies) and incorporating some of those aspects into their music, pairing it with a discernible personality, instead of attempting to create sterile replications of those bands’ songs. As it stands, Terry Tales & Fallen Gates is an assembly-line pop EP that falls flat due to its overuse of summery aesthetics and (what feels like) disingenuous imitation.