1. Heartbeeps
2. Born for a Short Time
3. Crimes of Infancy
4. Heartbeeps
5. The Meat of the Inquiry
6. Spoils of Injury
7. Eat the Prize
8. Spoils of Victory
9. The Universal Polymath
10. Heartbeeps

Other Records by The Mae Shi 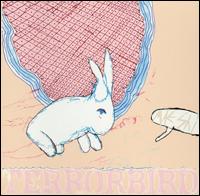 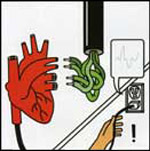 Like an ADD child raised on Sesame Street tapes on fast forward, you get the feeling that nothing holds the Mae Shi’s attention for very long. The LA band likes to make short, frantic, yelping, bleating songs. Last year’s Terrorbird was a spastic call to arms for freak-punkists everywhere, blasting through 31 songs in about 40 minutes. But the truly amazing thing was the breadth of sounds they were able to capture in those 40 short minutes. As makers of mix-tapes and sound collages, the band seemed equally adept at furiously channeling post-punk gods, creating lilting hip-hop beats, evangelical bird-screeching, grooving to funk then easing into a lucious glitch-pop ballad. Rather than a collection of short songs, the album was a bloody, bleating whole, borrowing ideas from one song to the next, revisting riffs in a thematically tight whole.

The band’s newest, Heartbeeps, continues in much the same vein as Terrorbird, though with a few twists. A short rollercoaster ride at 10 songs in 16 minutes, the album recreates the length of the bands early live shows --- apparently someone once told the Mae Shi you should always leave ‘em wanting more. But I’m not going to fault a band for putting out a short EP’s worth of material a scant 10 months after their last album, if anything I wish more bands were as generous. It also helps that Heartbeeps contains some of the Mae Shi’s finest moments to date.

After the intro bleeps and whirs of “Heartbeeps (1),” “Born for a Short Time” rips into the dominant Mae Shi sound that kicked off the front half of Terrorbird, a spastic mash-up of Melt Banana, Deerhoof and Fugazi-style post-punk with lead singer Ezra Buchla yelping, “I was born in a magazine!” “Crimes of Infancy” continues in the same way, a stuttering, screaching, panting noise-punk-pop collage. “The Meat of the Inquiry” is a crunchy, noisy howler than does call to mind Deerhoof more strongly than other Mae Shi material; but, like Terrorbird, Heartbeeps evolves from this interesting, though familiar starting point in its second half.

“Spoils of Injury,” a criminally short burst of electro-pop beauty, leads perfectly into “Eat the Prize,” one of the best songs they've recorded. At once channeling and moving past the Fugazi/Deerhoof influences, it surges with an energy that is all crackling terror-pop and somehow manages to integrate the slower glitch-pop. It is a song where they take their helter-skelter way of assembling albums to build a truly unique and fascinating song ---- the song is beast that careens from gorgeous guitar riffs to chugging, anthemic rock and back. It is this kind of experimentation that will continue to make Mae Shi a fascinating animal. The song that follows, “Spoils of Victory,” is equally fascinating and shows the group again making something deceptively beautiful out of the ashes of their furious squall.

The mini-album finishes strongly with “The Universal Polymath,” which revisits Terrorbird’s fantastic “Vampire Beats,” and “Heartbeeps (3),” an epic burst of anxious, melodic key-pop with the group’s infamous bird-chanting buried in the far background. As the song moves into a ripping, overdriving guitar riff that crescendos and then cuts out, one of the shortest, most perplexing and engaging efforts of the year abruptly ends. It is a short squelched transmission of impossibly intriguing noise-pop that only leaves the listener wanting much, much more. One gets the impression that is exactly the way the Mae Shi want things right now.