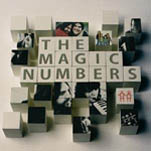 Most truly great pop music begins with the double-clap. If fact, one might say that what the pentatonic scale is to rock, the double-clap rhythm (the featuring of actual handclaps being negligible) is to sun-drenched melodies. It’s certainly as prevalent, surfacing in everything from “Please Please Me” to “All For Swinging You Around,” not to mention my personal favorite, The All-Girl Summer Fun Band’s “Brooklyn Phone Call.” The Magic Numbers’ debut album is filled with double-clappers, both in the actual musical sense and in the gloriously transcendent, life-altering, I-think-I-just-saw-God-in-that-guitar-solo!!! sense. Simply put, The Magic Numbers is one of the best pop albums of the year. Or at least the most undeniable. Read on.

You get the feeling Yo La Tengo could’ve been this band once, if they played a little faster and did more Beach Boys covers. The Magic Numbers have the same retro sensibilities, keeping an eye on the rearview mirror without ever taking their foot off the gas. Looking for influences? Try The Lovin’ Spoonful and 50s doo-wop for starters, all wrapped up in the sheen of treble-heavy Dear Catastrophe Waitress guitars.

The album makes its mission statement with the opening “Mornings Eleven.” The song begins with a lone guitar before the bass drops and the drums kick in, waiting a mere half-minute to reach the first harmonized chorus. Another minute later, the song has made its way from cutesy twee to an extended doo-wop section, from which it heads back to the initial verse/chorus only to segue into a Byrds-y instrumental passage, closing with a triumphant return to doo-wop. “Love Me Like You” touches on 90s power-pop, while the subdued “I See You, You See Me” recalls Yo La Tengo without the loneliness. Such a bevy of influences usually results in a bloated, inconsistent mess (try matching every song on Ryan Adams’ Gold to the appropriate 70s band/artist), but The Magic Numbers never fall into this trap. Their inspirations are focused through a contemporary lens, thanks to concise instrumentation and singer Romeo Stodart’s confident presence.

The other great staple of post-Swing era pop music is the art of the backing vocal, and in the Magic Numbers, who happen to be comprised of two brother-sister pairs, everybody gets a chance to sing. Being pop musicians, of course they’re going to sing about love, and of course they’re going to spout some clichés: “Love is just a game/broken all the same/and I will get over you,” the group sings on “Love Is Just A Game.” Thankfully 70s-style Carpenters schmaltz rarely rears its ugly head on the record, but remember, this is pop music. It’s catchy, it’s cute, but on The Magic Numbers, it’s even substantive.

Sounds pretty great, huh? Wonder how it stacks up against The Coast Is Never Clear? Man, c’mon, what about SMiLE? When an album reaches this level of quality, it’s hard to judge it against the pantheon it so clearly draws from, so let’s forget it; after all, you can’t go wrong with the double-clap. The Magic Numbers is a big, shiny, wonderful birthday gift to the summertime, and it’s everything you’re expecting and more.