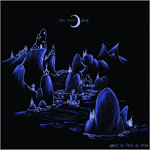 Yours As Fast As Mine

It's refreshing to hear ambition. In a year where hipster-baiting lyrics about all your friends (yes, all of 'em -- didn't you get the Facebook invite?), guitar pedals in lieu of melodies, and Cobrasnake-approved dance beats are enough to land groups some notice, there's been a relative dearth of indie rockers that sound like they're really trying. I spent my summer in New York, enmeshed in the Brooklyn culture that's dominated indie rock lately, and honestly, it wasn't the greatest of scenes: the only thing separating a band such as Parts and Labor -- who I saw on my last night in town -- from a group of dudes in a Williamsburg practice space getting stoned and stomping on their Korg AX1500G is a record deal and a spot opening for Les Savy Fav. Which is certainly respectable! But then you hear an album like the Main Drag's Yours As Fast As Mine, and the game changes.

The Boston-based band's sophomore release is a swirling studio effort that uses Pro Tools as skillfully as it does guitars and strings. Building on the John Vanderslice-by-way-of-Sunny Day Real Estate sound of their 2005 debut, Yours As Fast As Mine packs jittery electro, folk balladry and rock anthems under one roof -- and often in the same song. Take "A Jagged Gorgeous Winter," the album's Kingda Ka. Within twenty seconds, we've heard harmonized vocals, horns, keyboards, a spacey lead guitar, a rat-tat-tat drum machine fill and a massive hook: "Nights filled with longer hours!" Singer/guitarist/studio mastermind Adam Arrigo shares space with his bandmates' voices until the song hits the bridge and he joins himself in singing "All the lies you told about me, they were totally, totally, totally true" -- the kind of sad contradiction that lies at the heart of the album.

For all the potential for mess, the assorted elements attach as cleverly as a 1000-piece puzzle. The Elliott Smith-like "Montana" balances out-of-sync acoustic guitars against each other in rhythmic counterpoint until Arrigo sings "I tried to make it fit!" and they stumble to a jagged halt. The payoff is a repetition of the line as a bittersweet string arrangement (courtesy of violinist Matt Levitt) rises up in perfect harmony; symbolism, folks. Pretty, too. "Car Windows" is perhaps the album's most straightforwardly beautiful song, where interlocking acoustic lines underlie Arrigo's tender utterances. He still bears a vocal resemblance to SDRE's Jeremy Enigk, though luckily he leaves the drama to the swelling string arrangements that lift the back end of the song. He contrasts effectively with Matt Boch's drier, dispassionate approach on "Love During Wartime" -- a song bemoaning the inevitable loss of control in love, wartime, or both -- where they trade choruses and verses, respectively.

The attention to craft and the obvious time spent on production and decision-making is where the Main Drag excels: from the ascent from glitchy electronics to orchestral ballast in the aptly named "Goodnight Technologist" to "A Jagged Gorgeous Winter"'s stunning command of its tightly wrapped arrangements, everything happens for a reason. It helps that the songs are great, of course, and as abstract portraits of post-collegiate paranoia with hooks as sharp as diamonds, they'd stand just fine on their own. But rather than pile a few blocks -- or daisy-chain a few guitar pedals -- the band has built a monument.