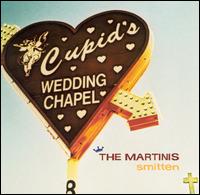 The Martinis possess nothing if not excellent timing. Right on the heel of one of alternative rock's most anticipated reunions this side of a séance table, Joey Santiago and chanteuse-wannabe Linda Mallari release their long-awaited debut album, Smitten. While Joey Santiago may have impaled many a Pixies listener with his rusty guitar, thus cementing his large role in shaping the band's unique sound, he wasn't involved in the unique vision of the band, at least he wasn't credited with any (hell, even Lovering co-wrote two songs). It was thus under great trepidation that I took it upon myself to review an album from a member of my favourite bands. Every music fan worth his or her pound of salt has at least one band/artist unto whom they grant their unwavering support. They act as a soundtrack of our lives, as conduits for the expression of the spectrum of emotion that is part-and-parcel with suburban adolesence. For me, one of those bands was the Pixies; from the moment I heard the drolling of "Bone Machine," I was, and still remain, under the spell of Santiago and Co.

Fast forward a decade and a half to 2004, and Santiago's latest offering: Smitten. Kim Deal had The Breeders and The Amps, David Lovering had his Scientific Phenomenalist career, and Frank Black had, well, himself. Mr. Santiago chose to linger in relative silence, choosing instead to appear on the odd Frank Black offering, and collaborate with wife and classically-trained pianist Linda Mallari. How does this husband and wife team fare compared to other love-and-music mergers? Well, The Martinis lie somewhere between Captain & Tennille and Sonny & Cher. That is to say, not very well.

Smitten starts off in a predictable, but surprisingly good fashion. "Flyer" has that guitar punch that Santiago should have patented while he was with the Pixies, and "Right Behind You" is a beautifully catchy three-and-a-half-minutes of power-pop at its finest. It is at this point of Smitten where the cracks in the armour are audible, even over Mallari's wailing.

Which brings me to what I consider to be a major shortcoming of Smitten: Mallari's voice. Although she seems to be a highly-regarded classically-trained musician, her chops just don't seem to cut the proverbial muster. She praddles around the vocals as if either totally lost, or so comfortable with the material that she doesn't really need to try, so why bother? In addition, throughout much of Smitten it sounds as if she's trying to do her best Kim Deal impression---most evident in songs like "Wishful Thinking" and "Big Three Wheeler" (the latter of which sounds like a spirit copy of the Pixies Deal-penned classic "Gigantic").

The lyrical content of Smitten lives up to its name, with thick-as-syrup love songs like "Right Behind You," "You Are The One," "Invisible" and the boring, stripped down album-closer, the piano ballad "Into the Meadow." Although "Walls of Silence" was an interesting tune, it's hard to tell if it's about her husband or an ode to weed, with a chorus like "Breathing in/ Exhale a taste of heaven/ It's all living inside my head." In any case, by the midpoint of the album, I was left thinking "Okay Linda, I get the fact you love your husband. Now move the fuck on, would ya please?"

Some other weakness of Smitten include the slick-as-snails production that pervades almost every song. The Pixies, including its offspring projects, were all about spontaneity; meanwhile, Smitten has the feel of a contrived project, lacking only the major-label suits drumming the tips of their fingers together in the background murmuring something about radio-friendly unit shifters. For example, "Out Upon The Road" sounds like a Matrix-produced Breeders song. I also found the drumming to be uninspired for most of the songs, which is hard to believe considering the presence of Josh Freese---one of my favourite session drummers and a talented musician in his own right. I honestly think Smitten would have benefitted greatly from some input from the "human metronone" David Lovering.

Aside from a couple of standout tracks ("Flyer," "Right Behind You," and "Big Three Wheeler"), Smitten didn't give me anything new, interesting, and worth the time to interpret, enjoy and feel stimulated by. Instead, I dusted off my copy of Pacer (1995) and enjoyed a true Pixies-begotten classic.