1. Prologue
2. Content Was Always My Favorite Color
3. (Oh) God
4. The Protagonist Suddenly Realizes What He Must Do in the Middle of Downtown Traffic
5. Proposition 61
6. Where Cedar Nouns and Adverbs Walk
7. In Places, Empty Spaces
8. Relative’s Eyes
9. King of No One
10. You’re a Loose Cannon McArthur… But You Get the Job Done
11. Epilogue

Other Records by The Most Serene Republic 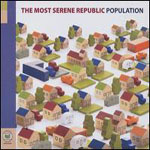 The Most Serene Republic: Population 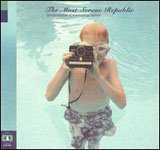 The Most Serene Republic

But wait! These fellows are on the label of the most powerful of Canadian super groups: Broken Social Scene. Holding the title of first Arts & Crafts band to not have recorded in Broken Social Scene (unlike Feist or Stars), it’s pretty easy to see why BSS members would become smitten with the Most Serene Republic. While not technically a super group in the sense that BSS or the New Pornographers are, MSR fits into that grouping by virtue of the fact that the group creates soaring, lush glitch pop that sounds absolutely huge. Like Postal Service writ large, the group turns the dial to “11” on the 80s synths and beats, while adding a few wrinkles.

After a shimmering prologue, the disc opens with “Content Was Always My Favorite Color,” an upbeat, chugging pop tune thick with hand claps and semi-intelligible bleated lyrics from singer Adrian Jewett. Jewett bears a distinct similarity to the Postal Service’s Ben Gibbard, both in his precious delivery and the borderline melodramatic lyrics he bleets out. “(Oh) God” doesn’t do much to dispel the Postal Service similarities, but is far more interesting musically, featuring a light, jangling guitar riff that cuts through the airy synth-pop.

“The Protagonist Suddenly Realizes What He Must Do in the Middle of Downtown Traffic” ups the musical ante once more, featuring a twinkling piano melody at the service of subdued synths and stuttered drumming. The drumming here feels far more immediate than elsewhere, where it could just as well be a computer program laying down the beats; acoustic guitar, horns, piano, drums, and synths of every color make appearances.

Unfortunately, the disc does not return to the high-water mark that “The Protagonist” represents. “Proposition 61” is an odd, subdued song featuring mainly handclaps and a tedious, repeated group refrain of “she took a sad song / made it better!” “In Places, Empty Spaces” rolls with a nice enough keyboard swell, but feels largely undeveloped. “King of No One” is languid trip into bossanova-territory that calls to mind late-'90s Stereolab.

The Most Serene Republic demonstrate plenty of talent in frustratingly short bursts on their debut. They’ve shown a tremendous ability to make their lush compositions work, mainly when they get away from emo-singer-meets-glitch-pop-ballad formula that the Postal Service perfected. “You’re a Loose Cannon McArthur… But You Get the Job Done” is one such moment that manages to channel the multiple elements MSR is working with and put them in the service of an interesting, engaging song. The song soars to a fantastic chorus, as piano, synth and guitar all roar with the same purpose. Along with “The Protagonist,” it’s certainly a tantalizing glimpse of what this band can do. But for now that’s all it is.