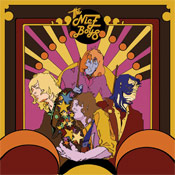 If nothing else, the Exploding Hearts will go down in this historian’s book as a band having woefully accurate nomenclature. “Sounds so ardent must meet fiery ends.” I don’t mean to be morbid, but an effusion of musicality like that, an outpouring of effulgent, ecstatic love for sound, for the puppy love possibilities of guitars and drums and blissfully inadequate vocal chords -- well, how could they have survived?

I don’t mean to lionize; I don’t mean to fetishize death; my fly is buttoned, and my martyr envy is tucked safely away. In fact, the “benefit” of hindsight in the case of the Exploding Hearts is directly at odds with the ferocious exuberance of their music, and I, for one, don’t need wistful, cruel irony to enjoy Guitar Romantic (2003). The production’s enough for me, and if that fails (it never does), the lyrics will suffice.

But the Nice Boys, the “from-the-ashes” buzz band featuring sole surviving Exploding Heart Terry Six, on the other hand, are gonna need some help somewhere. I’m not hoping for a tragedy, because that wouldn’t solve this music’s problem: it’s all affectation, kitsch, and cheek. Really, the contrast in names is review enough: the urgency and passion of the Exploding Hearts is wholly lacking from The Nice Boys. They’re boys, which is about right. But too nice, you know? Too nice. And that’s not shallow semantics; the problems are deeper than the name.

The everything-in-the-red fuckit thrust of Guitar Romantic has been replaced by something clean and careful. “Avenue 29” sounds like the type of Vines album track that David Fricke would dig, and the chorus of “Teenage Nights” is some pensive, prepackaged “Stacy’s Mom” shit. “Johnny Guitar,” which you can hear on the band’s website, has some fine moments, sure -- check those plodding piano cascades -- but the vocals are so wan. (So nice.) I don’t mind fey, but a rock and roll song called “Johnny Guitar” either has room for a) muscular delivery, or b) ironic distance. This is caught somewhere in the middle, too nice to be nasty, too nasty to be nice.

The Exploding Hearts never suffered such insecurity. I apologize for the continued comparisons, but the similarities are woven so deep. If Guitar Romantic remains indelible for its obstinate refusal to sound…well, dead, then The Nice Boys remains unlovable for its unintentionally haunted sound. Even a fair Zombies yoink like “Cheryl Anne” sounds faint. Would I like this album more if its tempos were quicker, its production more raw? No, because then it’d be too close to the album I wish it was, and I’d call its choices “obvious.” Am I impossible to please? A fair assertion -- I could be the worst critic on the planet to review this album -- but maybe Guitar Romantic is just impossible to follow up.

Bottom line: this band will probably get pretty popular. But not with anybody that loved the Exploding Hearts.