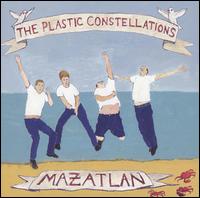 I tried. I wanted to love this album. I tried to force it, to shed my pretensions, my ridiculous insatiable desire for some semblance of profundity. Christ, I’m the guy who asked an Icelandic classmate: “Yeah, but if they were saying real words, what, in your best estimate, would they be saying?” Yet, despite my most driven efforts, despite drowning myself in camp films and even watching the Real Cancun twice, I cannot and probably will never get past this:

“Evil Groove, Plastics crew/ One time, for your mind/ Take the line, do the time” ("Evil Groove")

See, what you may have already read about Mazatlan is right. The record is an inexhaustible fountain of youthful energy; the musicianship is compelling and the guitar arrangements flawless experiments in atonal tuning; many songs have numerous movements and never cease to surprise after multiple listens; staccato drums and guitars, staggered multi-tracked harmonies, jagged rhythmic complexity and evil-twin well-oiled-machine bridges come together right now over your headphones and would almost be satisfying without vocals. There are even dashes and pinches of keys peppered in to keep things from getting too too raucous and, finally, the album maintains a coherent singular theme: what it’s like being a newly-bacherlorized post-grad in a band in the Midwest. Didn’t Mike Skinner just write a hugely successful album about what it’s like being a slack-ass do-nothing joke-butt somewhere in England? Didn’t he do it with a calecovision and a drum machine made from a tin can and popsicle sticks? The PC’s should tear the roof off this mother!

See and you cringed when you read that last sentence right? Aye, there’s the rub; and it’s one of many that I owe you. The PC’s have a horrendous tendency to delve into an absolutely brutal brand of rap-rock that smacks of fellow Minnesotans Slug and Eyedea except without the skill to pull it off. In any one song lead vocalist Jeff Allen will go from almost channeling Fugazi’s Ian Mackaye to almost channeling D-Plan’s Travis Morrison to doing a really bad impersonation of anyone on Rhymesayers to doing a frightfully fantastic impersonation of the Offspring’s Bryan "Dexter" Holland (see "Davico" and "Oh No, Iowa" in particular, the latter vocally sounding like an Atmosphere/Offspring collabo in a very bad way).

And this type of often-offensive vocal performance, accompanied with the above-noted poor lyrical choices casts a gloomy smog over the Plastic Constellations’ otherwise shimmery, starry night. "Davico" is schizophrenic, its second personality flaunting wailing guitars, descending chords, sparkling string overdubs and a general air of hyperactivity that almost redeems its shortcomings--- not a humble task. This is a testament to the musical talent of the band, as every song that garners a complaint also demands praise for other aspects. And then there’s “No Complaints.”

“No Complaints,” thou Evil Seductress. This is the stand-out, stand-away, reclusive evil genius of the album and the free MP3 that induced me to pick it up in the first place. Plodding drums are accompanied by soft, near-ominous ascending piano chords. Finally, Allen comes clean with us and abandons the pseudo-hip hop stylings of too many of the albums other tracks: “These six years were always great/ And my big fear is never being able to stay in the past right here.” The album’s persistent sophomoric lyrics and themes are here explained and this confessional approach purges Allen of the colloquialisms infecting much of the rest of Mazatlan. The vocals end with trademark barely confident self-reference and the piece is taken over by triumphant scaling guitars challenging the heretofore dominant piano chords for bragging rights to the rest of the song. In a type of amicable sparring practice between the brazen and the contemplative, the piano perseveres, closing the song out on a delicate note and therefore providing the one nugget in the album that inevitably leads to frustration: more of this!

The strong, breakbeatesque mid-tempo drums plod along and force the listener to focus on the most thoughtful lyrics on the record, the most personal testamentary quasi-diary entry---which appears to be the lead vocalist’s 'thank you' to his band members for sticking with the project from high school, through college to the present. Stripped of the call and response, stripped of the badrap, stripped of the Offspring, “No Complaints” is a 14 karat diamond on a twist-tie engagement ring. Not nearly enough to make this listener buy the cow, however.

Despite the endorphined and testosteroned biology, take-on-the-world psychology, borderline precognitive band chemistry, mathematical technical proficiency, and the near-literary thematic consistency, the Constellations sound more like the piped radio backdrop to your year one requirements than something you’d consciously choose to put in your head. This is a great default record sure to have you covered when in a bind for social music; I’d go so far as to say that---even over Kanye West---it’s the year’s best appeal to the lowest common denominator in us all. The irony is that the discerning listener is likely to marvel at the Plastic Constellations just long enough to get reminded of how spectacular the real thing can be. At that point you’ll probably forget the party and walk home with the Dismemberment Plan’s Emergency and I in your headphones and your head tilted upwards. On the other hand, if things get a little foggy after three beer bongs and some cheap hash, the Plastic Constellations should do just fine.