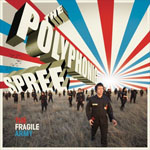 Still full of trite but brotherly advice, Polyphonic ringleader Tim DeLaughter's insistence that he speak about his personal experiences in terms of "the world" and "life" is stranger under the slightly dimmer light of this, his sprawling collective's third album, and its scale-back of former zeal. The novelistic simplicity of the polyphonic concept excused The Beginning Stages Of. (2002) by giving the impression that the songwriting and lyrics possessed some degree of ironic self-awareness. Together We're Heavy (2004) was more psychedelic in its noodling, but the basic concept stayed the same. With The Fragile Army, though the songwriting is more polished, the band has infused what was supposed to be silly, good-vibe encouragement with the import of a "Message," subjecting DeLaughter's words to the harsher scrutiny that that implies.

"We Crawl" usefully encompasses this idea, its tinkling pianos and DeLaughter's pat-on-the-back sentimentalities finally (if unsurprisingly) crossing a line: to be human is, essentially, "to live," "grow," and "crawl," which means we're "on our way / today" so long as we "try hard" and "stick together." Each random snatch of maudlin pap becomes more absurd with each listen the same way speaking a word over and over will turn that word to gibberish. Analyzing these lyrics may seem like shooting fish in a barrel, but the concept of the musical collective -- which The Polyphonic Spree once enjoyed being on the forefront of -- has outpaced them; their sounds have become more complex but the core expressions remain patronizing and child-like. Why is it that when you put so many talented musicians in a room together, some of them possess an inclination to gush and glaze, becoming totally insipid? I'm directing my eyeball at Architecture in Helsinki, I Am From Barcelona, and Anathallo just as much as at DeLaughter and company.

Their shallowness is even more curious given the group's militaristic makeover. Gone are the multicolored robes the group once unapologetically wore and in their place a more practical wardrobe of dark fatigues -- supposedly rendering the image of a platoon of hippies mobilizing to bring free love to the cities of war-exhausted America. Plenty of potential there for perspective, and an interesting premise (and challenge): how does DeLaughter propose to offer his trademark advice in such deeply charged and complicated times? The exact same way he did before, it turns out. "Overblow Your Nest" (with more of that lounge-act piano) offers "one day soon / you make a mess / the world comes down / and overblows your nest." And so we see the group for what it's finally, inevitably, become: a novelty run almost dry, operating in a vacuum independent of the world it seeks to lend clarity to. One's patience for this kind of thing doesn't extend much further than the band's first couple of albums.

There's still a lot to like, and less than you might think keeping Polyphonic Spree from being more than an idea. "Running Away" and "The Championship" are both catchy and epic in tone, if not offering anything different on the lyrical front. They are also impeccably produced, balancing a healthy stable of instruments and using the group's choral ensemble in only the most effective bursts. "Get Up and Go" possesses a likable rock and roll stomp and thankful breaks from the group's oscillation between full-on tempo and ballads. But DeLaughter needs to be more personal; already having a dozen people yelling at you distances the ideas they express, but emptying those ideas of any meaning isn't the answer.