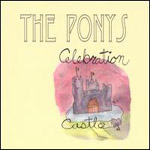 Making it a bit difficult to avoid the list-that-influence game, the Ponys' sophomore release seems bent on blending the best of the '70s with the best of the '80s, and... er... the Rolling Stones, the Clash, the Buzzcocks, Richard Hell, Television, the Vibrators, Iggy Pop, Mission of Burma, Joy Division, XTC, the Pixies, Sonic Youth, to name a few. Cough.

Give "Glass Conversation" a chance, and it'll move into your house and eat all your cereal and sleep with your girl, and you'll be thanking it. Drummer Nathan Jerde keeps his kit marching through the verses with only a brief series of thuds on the chorus, rumbling on under a guitar solo that's rock-concentrate until he finally lets loose on the hi-hat while Jered Gummere yelps, "I don't wanna hear that, feel that / Glass conversation." On "Today" the bustle of the track chugs along before unveiling the prettiness of its punk in a calm break with organ; thus, it preludes the precious "I'm With You" and the album's snow-crested tip, "We Shot the World."

Indubitably, "We Shot the World" is the anthemic, Cure-like centerpiece of Celebration Castle. As Jerde pounds insistently, a long snake of a guitar line's joined by another that's just as sinewy and brilliant, and Gummere sings rather glum verses that lead seamlessly into shouts of the titular hook. Hearing bassist Melissa Elias echo "we shot the world" may invoke the sense of some lost Surfer Rosa gem; this is probably as good a place as any to drop the requisite Albini-produced-this-album comment. Albini produced this album.

A touch of Pixies can also be heard on "Shadow Box," the subsequent track. The electric on the hook starts throwing whiny stabs before running into a crumbling and rebuilding wall of distortion, like Joey Santiago morphing into Burma's Roger Miller. "Get Black" creates a mental picture of Mick Jagger and Keith Richards strutting about on stage and being grossly irresistible, and, with Melissa taking lead vocal duties, "She's Broken" sounds like Sleater-Kinney before they rocked The Woods so hard they earned honorary degrees in manhood.

Celebration Castle has a great closer in "Ferocious," a rush of cymbals and guitars with a couple spaces for focused soloing. It doesn't immediately remind of any one band in particular, but it's awfully familiar. Then again, the album could be titled Awfully Familiar. The Ponys' arms are so full of the good old stuffs, they can't offer much that's new or really interesting, yet they're talented enough to make it difficult to care about that sort of thing. They're kind of bastards like that.