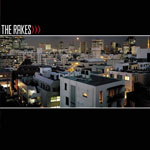 Having helmed the debuts of Bloc Party, the Futureheads and Maximo Park, the indie producer du jour here distils The Rakes’ working class ethic and social awareness into an admirable post-punk melange of synths and sins --- the wiry guitars weaving a colourful backdrop for the regrets of the last night on the tiles.

File The Rakes under "serviceable art pop"; the guitars are clipped in the right places, a robot mans the sticks and vocalist Alan Donahue successfully feigns ennui in the face of "the man." There are no surprises here, the music nothing more than the next few notes off a conveyor belt, custom built to provoke disdainful glances from indie scenesters as kids with skinny ties mindlessly bop in the halcyon of disco lights until the curfew is up, the parents are angry and it’s time to go home.

That said, there is nothing wrong with The Rakes’ debut, the inherent problem lying in the throngs of an overloaded scene buckling under the pressure of unfathomable, and unnecessary, hype where new bands not only have to distinguish themselves from their peers, but try to capture the attention of an impatient public who must surely be getting bored of this retro revivalist shtick.

The Rakes, however, ply their trade well and Capture / Release is chock full of deft pop hooks that recall the Pixies (“T-Bone” = Subbacultcha) as often as they do Blur. The album works best when the band keeps it short and sweet. Breakthrough single “22 Grand Job” is a precise and surprisingly affective detail of the woes of city life --- where “it’s alright” if “the money is alright” --- that locks up in under 2 minutes. Both “Open Book” and “Violent" --- the former a fragile tale of crippling boredom (“I just need something to focus on”) and the latter an irascible trip through the recesses of a town --- succeed due to the classic pop combination of an impelling thrust and a thoughtfulness in lyrics tailor made for empathy. Who can’t relate to lines, as generic as they are, about drifting “along with no focus or meaning," having “the same shirt on for two days in a row,” or having “someone always talking when I try to make some sense?”

It’s when the band bring in the trite imagery, particularly on the throw away number “Binary Love," where talk of burning circuits and “satellites connecting us,” are --- unless I’m missing some Kafkaesque labyrinthine hidden loop here --- meant to signify how technology and the modern world are impersonalising relationships. Try as they might to make it work, the song oddly, and unfortunately, seems like a bloke rock bar band covering The Sophtware Slump.

Meanwhile, forced theatrics, such as the alarm clock that beeps at the beginning of “The Guilt,” cause our protagonist to rise to the tune of the aforementioned song, complete with the ironic opening line ( “I just woke up”). It may (artificially) show how the band are one and the same with their fans, but it ultimately lacks the impulse, that paradoxical spark of conviction, that rubs off on everybody like the plague; the joyous feeling that something is in the air.

If The Rakes speak for any generation, it is one that advertises its despair, assimilating it as part of everyday life. It's culture that creates a fashion out of failure --- where, to paraphrase Clerks, those who hate people still enjoy gatherings. It is a practiced push, a sham of spontaneity, the idea that something is going on stage, but nothing off of it.

Suffering to a large extent from recycled riffs and mashed messages, Capture / Release is effectively a cyclical manifesto, the minor variations between songs unable hide the fact that the Rakes have nothing much of importance to say.