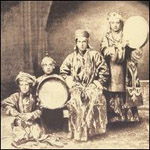 The Soundtrack Of Our Lives

Rock is nothing if not loaded with double standards. Case in point: when the obnoxious Aussie pricks that comprise Jet steal their tunes wholesale from '70s classic rock radio they’re derided as “blatantly unoriginal” and “derivative,” but when the goofy, aging Swedish dudes of The Soundtrack of Our Lives go and do precisely the same thing, they’re accepted with open arms --- viewed as “paying tribute” to their musical heroes.

At least that was the case with 2002’s Behind The Music, The Soundtrack of Our Lives' (TSOOL) first big splash in North America, and a rather enjoyable batch of melodic rock songs that despite shamelessly deriving it’s sound from just about any “classic rock” band you can name, warranted repeated listens based off of plentiful hooks and some charming acoustic numbers to counterbalance the abundance of Marshall stacks. The band also had charisma in spades courtesy of the cape-wearing, Kodiak bear resembling frontman that is Ebbott Lundberg, and the fact that, hey, they’re from Sweden!

I doubt that anybody who found enjoyment in Behind The Music will be able to outright hate Origin Volume 1 because it’s about as similar to its predecessor as a follow-up record can be, containing nary a single song that would have sounded unusual on Behind the Music. But this also means it’s not nearly as fresh, and simply falls prey to the law of diminishing returns. There’s an uncharacteristic lack of hooks this time around, and the “tributes” have gotten to be so blatant that they're borderline plagiaristic. “Transcendental Suicide?” Keith Moon’s estate is earning royalties as we speak. “Royal Explosion Part 2?” Homer Simpson liked it better when it was called “We’re An American Band.” These guys won’t even think twice about jacking their own steez; “Heading For a Breakdown,” basically rewrites Behind The Music’s “Twenty-First Century Rip-Off” and adds Side-A of Revolver for kicks.

What makes this band periodically rewarding is that in addition to their ability to drop a great psychedelic pop song every three or so tracks (“Believe I’ve Found,” “Lone Summer Dream”), their chops are second to none. “Transcendental Suicide” may be little more than a well-intentioned tribute to The Who, but leave it to The Soundtrack of Our Lives to believe that they are The Who; attacking the song with enough utter abandon to fool listeners into thinking they’ve stumbled onto a bonus track on a Who’s Next reissue. For such a dude-centric band, the spy-movie riff of opener “Believe I’ve Found” is surprisingly lithe and slinky, and holy fucking shit does the album ever go out with some craaaaazy “Freebird”-style action at the end of “Age of No Reply” (the latter being the original album closer --- “To Somewhere Else” and “World Bank” are the typical U.S.-only bonus cuts).

And such is the nature of Origin Volume 1: big on pyrotechnics, but short on anything that will stay with the listener past the two or three minutes it takes your inner 15-year old to rock out. TSOOL’s unabashed exuberance and a few quality songs keep the album from being a total loss, but Origin is far too similar to Behind the Music to register much impact, and its tunes are considerably weaker. Fans of the latter would be advised to keep close tabs on the used bin.