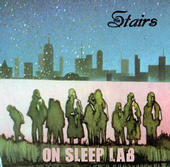 This doesn’t mean much until you know who the Stairs are. You probably won’t know who the Stairs are until you read this review. Then you’ll remember that sentence, that part about “breaking up.” This future you might already have downloaded some of the songs talked about in the write-up to come, and the future you might look back at the paragraph that the present you is currently reading with just a twinge of pain; you’re facing a dead band’s final showing of potential, and it’s confusing because you’ve just discovered some hope for their musical future, but you’ve discovered it after their future’s over. It’s like watching Jean Vigo’s L’Atalante and thinking, “Wow, this guy could make some really classic films someday when he’s alive again.” Except this feeling’s even more muddled than that. L’Atalante is a minor masterpiece in its own right; On Sleep Lab is merely the Stairs’ promising last gasp.

The Stairs released an LP and EP before this ugly-duckling-on-the-verge-of-swan song, but you probably didn’t hear about those releases because they’re on Access To Visions Records, which should be called “Stairs Records” considering that the catalogue number on the side of On Sleep Lab reads “ATV004.” So, hopefully, there’s no past you with a budding Stairs fandom that’s now prime for crushing. ‘Cause, holy Ryan Schreiber, these guys could have been The Wrensy Jeff Mangum Decemberists Explosion, but they haven’t yet developed (never will develop) the subtle melodic excellence of the Wrens nor the Mangum brains, and I’m pretty sure they don’t do something as well as The Decemberists. Oh yeah, for instance, they completely fail at being produced by Chris Walla.

What can enthusiastic indie amateurs with a homely recording budget accomplish? On the first four songs of On Sleep Lab, they bust out a flawed yet ultimately rousing run of music, one that inspires such a swell of good will, it almost carries the listener on smiling through the choppy waters of the album’s remaining forty minutes. The opener solemnly intones, “And don’t you cry for your dog / He lived a good life / and now he’s running / somewhere else / somewhere else / somewhere else.” Plaintive strings and guitar pickings and brushed cymbals follow in what surely must read like a cliché of an instrumental passage, but in actuality it’s deeply stirring, and its memory pushes the song past a loud, awkward coda to an oddly pretty sustain that degenerates into five seconds of noise.

On “Welcome to Confusion” a bobbing basso and acoustic guitar lead the song’s first verse with a dainty pace, the lines “where each mistake made / is a compliment paid / to the implacable host” stopped by swooning “ooohs” before a driving electric guitar line cokes up the song and the percussion turns wonderfully ramshackle. It reeks of Meloy. The second chorus seems an exercise in tripping momentum, but then the conclusion arrives: “I am everything / I am everyone / Babe, I am nowhere / I am the confluence (in your heart, in your heart) / I am the dissonance (in your heart, in your heart),” after which the music becomes so effusive that the vocals dissolve to wordless harmonies and hollers.

Imperfect only in its predictable breakdown, “Escape Clause” romps about with Devin Davis cheek and jumpy, early Wrens guitars and keys. “These Damn Hands” returns from the edge of disintegration for a minute-long build to the record’s finest climax, its mantra lifted to a high-strung pitch: “Don’t look away when I shake hands with you / You don’t know what these damn hands can do.” There’s the set-up for a maybe great record.

The album’s beginning, though, works as a favorable ratio of strengths winning out over bothersome weaknesses. The scale starts to tip to the other side with “This Town Let Me Down,” an E6 type of arrangement built on a loop, like something that Rogue Wave might have fashioned, and unfortunately also like something that the Rogue Wave of “Postage Stamp World” might have penned: “I hate it when you’re alive / I smear myself with honey from places even bees can’t hide.” Guys, I got a little embarrassed just typing that.

On Sleep Lab never extinguishes its strengths, though; they simply end up in the minority. An unusual Brit-pop guitar line on the verses of “Smoking Armada” steps aside for a chunky, ugly hook, but the part where the band sings, “1917 or 18, Gregorian or Julian, numbers bring me down” --- it’s a Shins’ “Turn a Square” brand of awesome. “Not Sorry” buries a gorgeous little chorus in four minutes of Elvis thigh jiggle. The nauseating cheese and pointless barbershop echoes of “Oh! Sunday Morning” precede the shambled, ascending-to-anthem progression of “Fireflies (November 10th).” “Einstein and His Enemies” and “We’re So Underground We’re in Japan” are kind of good. “Bug Hospital” and “Crooked Horse” kind of suck. Lyrically, they’re all kind of silly.

With its hour-long running time, On Sleep Lab wants to be an indie-pop epic somewhere between Secaucus (1996) and In the Aeroplane Over the Sea (1998), but all its scattershot moments of brilliance can’t fully justify the goiters of bloat that weigh down and surround them. It’s an exemplary these-guys-aren’t-there-yet-but-let’s-definitely-keep-an-eye-on-‘em album. So download “Escape Clause” and “These Damn Hands,” and get excited. Get psyched about a Stairs record with more honed songwriting and less honey talk, less goofy wanking. Maybe they could even get Phil Ek to produce. Hoo, boy. Then soberly remember: