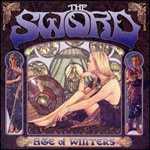 Metal typically comes in one of two categories: either dead fucking serious or stoopid and self-aware. Your preference can probably be traced back to whether you heard Black Sabbath or Blizzard of Oz first, the originator or the nostalgic echo. The first category is carried on by bands like Boris at one arty extreme and Mastodon at the classicist core; the second category lives on in the work of bands like the Darkness and, yes, the Sword. But since the Sword doesn’t present itself as flag-bearers (like Mastodon) and harbors no pretensions of songwriting depth (like the Darkness), the success of this album isn’t so much qualitative as quantitative. The question for an album like Age of Winters — given the band’s aim, conceit and pretension — is: does it deliver?

The answer is a qualified yes, in that the riffs come quick and harsh, the song titles are stupid, and the “singer” sings just like Ozzy, which means that he doesn’t sing, he bleats. The album’s rating above isn’t indicative of its artistic heft; it is, rather, a reflection of the percentage of the time that Age of Winters satisfies the thirst it attempts to quench, the percentage of time during which I, passing a small, wizard-shaped bubbler to a friend, might remark that these guys fucking rule. About seventy-one percent of the album fucking rules, if you get what I’m saying. I’m kind of treading water here.

To wit: “Winter’s Wolves,” which rattles to life with a restrained upward thrust, chkachunks through a pre-verse riff and finally explodes into being at the 1:15 mark for twenty-five manic, thrashing seconds before rolling back into its seething, compressed starting position. When it bursts back — “Many battles will be fought here!” — the feeling of satisfaction is accomplished but not trivialized, employing what passes for restraint in this context, falling back on a single megalithic riff and, at last!, some fake wolf sounds. The track “works” thanks to its dynamism, and, when it flips to the “The Horned Goddess” with a lumbering guttural howl, you will understand exactly what I mean when I refer to this album’s “success” — that particular moment fucking rules, even if the rest of “Goddess” is fairly unremarkable. In this manner, Age of Winters satisfies on a moment-to-moment basis, its appeal lying somewhere between that oft-abused heavy/loud binary and the quicksilver rush that accompanies air-drumming.

Of note is the production, Pro-Tooled with Nickelbackian levels of precision but, oddly, no worse for the polish. This is an album about guitars, after all, built on riffs and spiraling (but never rambling) solos, full of trilling overlays and contrasting underpinnings, and the production of these guitars is accordingly lean and forward. The bass and drums are relegated to supporting roles, and the singer is little more than rhythmic accoutrement, but the riffs come with that familiar crunchy, round low-end, and the lead guitars have a phased, warbling shake to them. The few nonmusical sounds on the album, like the dragon-mouthed synths of “Celestial Crown” or the wind-ravaged aural vista that opens “Ebethron,” are utilized carefully, always to evoke the ridiculous phantasmagoric panorama in which the Sword might smite evil, or at least get totally baked to. In this humble enterprise they’re successful — at least, um, seventy-one percent of the time.