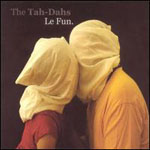 A funny situation worth a chuckle or two: before I got to reviewing an album called Le Fun, I was neck deep in the stew of the math-rock apocalypse called Lightning Bolt’s Hypermagic Mountain.

But don’t chock up the higher rating here to relief in coming to a more whimsical album. Le Fun is indeed fun as hell, but it’s also strikingly bon. Don’t forget that whimsy can be irritating as fuck, and most bands who think they’re just cute as kittens ought to have their asses kicked.

Despite the preciousness of their band name and album title, the Tah-Dahs are some of the finest pop craftsmen I’ve come across in some time. Mingling the skewed songwriting of Pavement with the kind of lack of self-consciousness that Weezer used to have before we started erasing them from memory, Le Fun is liberated and wonderful rock.

In terms of lyrics you’ve got to be charmed by these guys. Tempering love pangs with plentiful wit, Roy Ivy (whose voice is appropriately reminiscent of Steve Malkmus) croons such clever lines as “Sober as I throw my woos / But girl if you were booze / I’d be an alcoholic,” and “There’s nothing else to see in New York but you.” He also unearths surprisingly profound sentiment in the simple phrases he juxtaposes against more complex lyrics. In “Whoo-Hoo-Hoo,” he sings, “Nation of filters in my ashtray / Chalkin’ the days by the disco drone / Spitting smoke signals and sleeping alone,” to follow it up with the poignant lines: “I hope that you don’t get a haircut / Please don’t run off with another man / We can’t pick up right where we left off / I’ll take what I can get.”

But the absolute clincher of Le Fun’s excellence is its songwriting, which consistently maintains the quality that Devin Davis reaches at his better moments. Not a song here languishes without at least one great hook and a melody of solid worth. The band paces itself nicely, moving back and forth between evolving punk rhythms and measured rock tempos. And they keep their songs tight, usually at no more than three minutes resulting in an album full of memorable highlights.

“New York” is arguably one of the best, crashing into everyone’s favorite or least favorite town armed with a fantastic verse hook and an even better chorus. Its resigned lyrics are clever and emotional powerful, often at the same time: “Eggers might invite me to a kegger / But I’d pass on that invite just to hold you for one more night.” Melodically it shifts between upbeat turns and melancholy sweeps with smooth artfulness, showing just how accomplished The Tah-Dahs’ musical penmanship is. “Huge Eyes and Ha-Has” tumbles forward on clean drum fills and a muted guitar figure, only to wrap the same figure in a splendid overdriven guitar finale that’s hailed by a brilliant feedback squall.

Even the band’s lighter fare, like opener “Alcoholic,” is peppered with more than enough wordplay, effortless dynamics, and pop acuity to make it eminently accessible, but more importantly, worth coming back to. The only reasonable complaint that might be made against the band would likely involve the words “not ground-breaking” or “simple.” But neither of these qualifications should disqualify the band from major praise; it’s a paradoxical axiom that simply, effective, and well-constructed pop is one of the most difficult things to nail down. On the surface, it’s all about fun, but underneath the carefree veneer, its sterling songwriting makes Le Fun one of Le Best Pop Albums of Le Year.