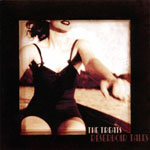 Tweet
Where have I heard that riff before? Persistent and relaxed, playfully handled and buzzing like a fistful of energy. More than the blues riff itself, though, that guitar growls and chirps and slithers tight to the contours of it in a way that's oh-so-familiar. Then the voice rises, bringing sudden and indisputable context, "Saaayynnd castle whiskey from a baby food jaaaahhhh / Wit' a second-hand reserve only adamance knows." The voice is colloquial and dramatic, twanging "sand" in the same bar as it opens the end of "jar" for effect. It's a queer falsetto, and when it screams away from the mic to face its drummer and stomp out a bridge there will be no doubt in your mind that you're listening to the White Stripes.

You're not. But when you hear the voice, after finishing the last run of the break, saunter back to stage front chuckling, "Oh, there's more," you'll bet I'm wrong. This fata morgana was pulled from the ether and brought to you by the Treats, a Madison, Wisconsin guitar rock three-piece who seem to be comfortable wearing other colors in public than red, white and black; Andrew and Don Isham are actually brothers, not divorced spouses claiming to be siblings; and there is no Byzantine web of personal mythology enshrouding the Treats. I guess I shouldn't be surprised. I mean, the White Stripes are not normal. But, damn, that killer impression isn't quite normal either.

I'd be doing the Treats a grave disservice if I remarked only on their impressive ability to channel a certain Detroit duo, and passed it off as a review without more analysis. The likeness is maybe the most striking thing about the record though, and it gives rise immediately to a dilemma which will be discussed later in full. That being said, this album is comprised of 18 songs not all of which are mirror-image homage to the Stripes. In fact, it would be more apt to say that the Treats have imbedded sliver fragments of a tribute album into the flesh of the expansive (perhaps obese) track list of Reservoir Tales. Some of these songs sound nothing like the White Stripes. I can only assume that these are the songs that sound like the Treats instead.

Though the residue is not quite as engaging, Andrew Isham proves to be a respectable songsmith in his own right. "Feral Ground" easily possesses enough folky bounce to jostle out some room for distinction among its fellows. "Eve's Playground" sets a simple and aggressive punk structure up to have its door kicked in by a credible sneer. "Like an Animal" features Isham reaching a level of unhinged that is truly infectious, abusing his range with guttural growls and vein-pulsing squeals. So when they divest themselves of their costumes and show up as the Treats, they get the job done in any number of ways. It's perplexing, then, why they chose to hem themselves in so tightly.

See, there are at least four lethargic ballads ("Without a Word," "You Don't Have to Change," "Come Around," and "Aryan Story") that weigh down the pacing of the record unnecessarily, exacerbating the already fragmented feeling of Tales. These minor keyed slogs are an understandable attempt at balance (including 18 tracks on a sophomore album evinces a certain preoccupation with bases, and keeping them all covered), but Isham's voice is ill suited to them, and a less charitable observer may at this point draw hurtful comparisons to Puddle of Mudd and their ilk. I'll not.

Which leaves me with the implacable question that I've been avoiding due to its sheer futility: What am I to make of the sizeable "White Stripes" portion of this work? If I was a radio DJ this would be the part where I open it up to the phone lines because I'm genuinely stymied here. Must we write off an album because its aesthetic, though flawlessly executed, is almost completely borrowed? The stigma attached to ripoff artists is mostly due, though not often attributed, to something lost in the translation. Sure, the act of copying is itself a manifestation of creative poverty, but it might not be met with such derision if more people brought if off with the gusto of the Treats.

The description in the first paragraph is both an enthusiastic commendation and completely accurate. So let's be clear: Isham can wail. It is emphatically a good thing to have the ability to make your guitar sound like Jack White is playing it. But at what point does fidelity to one's influences become unimaginative derivation? If you have the passion and the wherewithal to bring down the house on a cold Madison Saturday night standing squarely on the shoulders of a rock icon, who am I to tell you to knock it off? Because, again, let's be clear: when these boys kick into "Secondhand Reserve," I'm sure the house comes down.

So, the answer to the question above? I'm nobody, that's who. As for the larger, semi-philosophical query of stylistic infringement I won't even hazard a hypothetical response. Absolutely everyone sounds like somebody else to a certain degree. And that's a useless answer to a useless question.