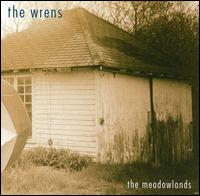 Sometimes an album comes along like an angel and just plain saves you. The Meadowlands arrived in my collection as some serious shit was going down for me. I was feeling an old flame that never was, that I had just gotten over, getting lit out of nowhere. I was deep in the abscesses of doubt over the worth of my college existence, despite good grades. I was debating dropping out of school and flying overseas to work and live by the skin of my teeth, just so I could write and be happy doing so. A love from Lithuania that I had met in North Carolina had called from Florida, telling me she was in desperate trouble, begging me to tell her what to do. I was overloaded with work. In a few words, I was teetering on wreckage, when I first listened to The Meadowlands. And it pulled everything together, made everything hold. Listening to it at least a dozen times within the first two days of owning it, its broke-down beauty and serene fragility embodied everything I was going through and healed it all.

Now, a reasonable objection (I am a critic and not an emotion-ruled fanatic) is that whatever emotional weight a record holds shouldn't have bearing on how you rate it. True, and untrue. If a record can accomplish genuine emotional weight through art, then more power to it, so long as it nails the technical skill and song-writing strength that must hold for an album to be worth the effusive praise I'm about to give this one. Yeah, a break-up song that exactly mirrors your own break-up will certainly lend an impact to the song that might not normally be there if you were just looking at its technical merits. But if that song not only hits the emotional chord, but manages to stun you in its technical and songwriting merit, then by heaven that's everything that music can reasonably hope to accomplish. The Meadowlands does it almost perfectly for its entire length of 50-some odd minutes.

So why don't I tell you something more substantial about this album The Wrens have made, as it currently wrestles with my ever-resilient top two favorites - Radiohead and Broken Social Scene - for album of the year. Where the Wrens have succeeded is in part where the aforementioned have failed (in an admittedly very minor way, but we are splitting hairs here). BSS and Radiohead both made incredible albums, to be sure. But BSS in particular suffers mildly from what I call album-splatter, that is to say, despite the album as a whole remaining cohesive, it nonetheless pulls itself in different directions, up to, but not crossing, the breaking point. Radiohead suffers less, barely noticeably, from the same difficulty. Because both BSS and Radiohead have genius spilling out of their ears, maintaining a single, uncompromised vision is difficult. The Wrens have it perfect. Their subject matter is a brutal melancholy, and they stick with it through every beautiful variation that they can come up with. Every possible version of failure or conflict is explored lyrically, melodically, texturally.

The album opens with an intro track full of night sounds and speeding cars, to put you in the mood. The immediate feeling is that life is passing these guys by, and they know it, and it kills them, but they might as well write some gorgeous music about it. And oh, the first real track gorgeous. Riding atop a superb melody, the song rings of Yo La Tengo's And Then Nothing Turned Itself Inside Out, before it lifts its shattered heart off the floor. The guitar line is lovely, while the bass is the song's emotionally broken core. A second guitar line picks up to complement the first, and they move in disjointed restlessness while the bass mopes. "You don't even want to touch me," Charles Bissell begins to howl, as one of the guitars reaches for a black sky with heartbreaking, gut-spilling chords. "I wanted you / But I'm over that now / I'm over it," Bissell bleeds, before the guitar lines start to ripple with tension and cascading guitar effects layer them over. The song builds to a desperate climax before cutting out and leaving pristine, lovely guitar chords to carry the song to its stunning conclusion, beaten with distorted reverb and plaintive wails.

It leaves you breathless, and the rest of the album will keep you that way. Chock-full of meticulously put-together songs, spanning a range from angry, restrained punkish attitude to pure down-in-the-dumps loveliness, the Wrens fill out their music superlatively, and use contrasting space with perfect expertise. Even more stunning is their construction of melodies that are unpredictable, with one note in them seeming to always drive home the killing blow.

Every song here is stellar, but there are a bunch which are pure genius: "She Sends Kisses," builds itself to death before collapsing under its emotional throes into pure glory; "This Boy Is Exhausted," with its jangle-pop catchiness (though it certainly isn't sunny) as it details the difficulties and jadedness of a band ripped by time and label-pressure until they can barely keep their heads up; "Hopeless," my favorite here, which turns its initially pristine, beat-down melody into one slashed with knifing guitars and crushing emotional intensity, punctuated with angelic, mourning synths, carried on a furious and inventive drumbeat; "Boys, You Won't," with its rupturing guitar lines and head-in-hands piano lines, filled in between its hooks with a barely audible melody and the occasional pained guitar shock; "Per Second Second," with its angry beat and filthy guitar melody and generally killer rhythm/guitar interplay; "Everybody Takes Sides,"; "13 Months in 6 Minutes"….well it appears that I'm listing just about every song here because they're all so great.

What's stunning to me is that this is probably classified under indie rock; usually I've always enjoyed the genre, but it would rarely top my year-end list. Often indie is more endearingly ingenious than genuinely affecting. But this album, this glory of an album, is so ripe with emotional, jagged genius that it's absolutely the best example I've ever heard from indie rock. It has, honest to God, the power to save your soul. In our ratings explanations we call anything that receives a 95%-99%, "Seminal, life-affirming music. The kind of albums that justify being so in love with music in the first place." Folks, The Meadowlands is that kind of music, through and through and through. Do yourself a favor, and find a copy pronto. Otherwise, you might miss out on what could very well be the Album of the Year.