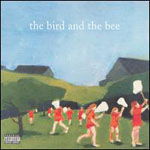 The Bird and the Bee

The Bird and The Bee

The Bird and The Bee is an album of the possible future that I have come to fear. Fun here is planned like a dinner party, and when drunken antics and sloppy kisses lead to moments reminiscent of youthful exhuberance, that means it’s time to go home. Greg Kurstin and Inara George claim to have a love for jazz standards, but so does my dad. This album maintains youth and vigor through dirty language and clean production, but eventually settles for something very middle-of-the-road. The Bird and The Bee are at their best when they eschew the stiff pretentiousness of being a “pop jazz” project and slips into something more comfortable. “Again & Again,” “Fucking Boyfriend,” and, to a lesser extent, “I Hate Camera,” embody this vibe. This is underwear dance party music--alone or with a few friends.

I’ve been pushing “Fucking Boyfriend” on every person I know to spice up that crucial moment between shower and party on a Saturday night, but I can imagine it works equally for the inverse of that situation: drunken post-party returns to nudity. “Fucking Girlfriend” is that perfect electro-jazzy-nova song that bares its soul only superficially; the yearning of the lyrics and the universality of the images (“take my hand and I will close my eyes”) is masked by the hyper-production which turns a Mirah-esque lament into a dancefloor throwdown. It’s a song that you can’t help but love because it not only turns frustration into glee, but also turns romance into kitsch. Being someone’s boyfriend seems as simple as grabbing someone by the wrists, which anyone who’s felt the tingle of late-night romance would say is about right. Sometimes.

Sometimes it gets more serious than that, and damn if The Bird and The Bee don’t know this as well. The album is weighed down by its absurd decision to take itself seriously, even though it is hard to imagine this album as anything more than second-generation pastiche. The easiest comparisons would be to Brazilian Girls or Nouvelle Vague or the Mosquitos, but this album somehow manages to lack most of the energy and sexiness that threaten to consume the debut albums from all of those bands. Besides a few really standout numbers like those mentioned above, something goes wrong here, and it sure as hell isn’t Inara George.

Greg Kurstin’s percussion and production are terrible once the rhythm drops below “dance.” The amount of songs where the description “melodramatic tambourine” is applicable is astounding, especially on “I’m a Broken Heart” and “Birds and the Bees.” The former is a plodding number with a warbling horn that is Burt Bacharach gone wrong; this track single-handedly reveals as a farce the rhetoric of “jazz” that surrounds the album. “Birds and the Bees” is even worse, and besides coming close to the strange trifecta of song, band and album all sharing a name (see Kurtin’s previous effort Action Figure Party), it feels overwrought and embarrassingly structured. The chorus is a collage of word-associated phrases, double-tracked and delivered strangely fast compared to the meandering verses. It attempts rhythmic complexity through production that I can only describe as a sad imitation of the sound that Matthew Herbert achieves on Ruby Blue. “Sparks,” the album’s closer, works precisely because Kurstin leaves the drum machine off, and surrounds George’s yearning vocals with atmospheric synths and echoing blips. It has a Sinead O’Conner feel to it, and works to bring the album to a gentle yet emotional conclusion, like rolling into the arms of a lover before falling asleep.

It only makes sense to return to sex here, since that is really the currency that albums like this deal in. Unfortunately, this album has too few pleasure romps and too many preludes. It’s all run-up and seriousness here, like the dinner parties of bourgeois faux-sophisticated late-20s singles, where the wine flows with hope and The Bird and The Bee album flutters around in the background.