Other Records by Thee More Shallows 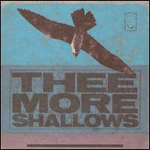 Perhaps scared off by the decade-long dominance of the revered Radiohead, or the scores of shameless and shameful imitators that littered the late '90s and early '00s, few bands have attempted to fill the void left in the atmospheric/experimental pop landscape lately. Opting instead for the safer sounds of yester-hip, it seems very few bands these days are actually willing to try something new. It’s led to a scattered musical playing field seemingly devoid of progressive acts, with more bands either sampling old styles or cutting and pasting styles together.

Now, Thee More Shallows isn't going to change all that in one fail swoop, but they seem to represent a step in the right direction. The San Francisco-based band’s eclectic, experimental pop is bound to draw comparisons to Radiohead and Grandaddy for their melancholy-yet-ebullient epics. The band’s sophomore effort, More Deep Cuts, contains songs like “Pre-Present” which certainly nod to those reference points (particularly early Grandaddy), but the band seems to have moved in a different direction by the time the album’s third track rolls around. A song about being honest because no one is listening, “Freshman Thesis” is an undulating masterpiece thick with coiling guitars, aching violins and mounting tension that explodes into a charged, chugging coda. The vocals, provided by frontman and band mastermind Dee Kesler (who, apparently, spent three years mixing the album), are quietly restrained and fit perfectly with the soaring, downbeat music.

The disc moves into a beautiful, acoustic guitar and pedal steel-led tangent, one of several well-placed interludes that allow the album to stretch and breathe before launching into another gem: in this case, a bittersweet epic about burying bodies in a mass grave. “Ave Grave” is a simple but elegant song rich with buried effects and eerie keyboards that has the feel of The Glow Pt. 2-era Microphones.

“Cloisterphobia” is another (properly named) gem, a song that builds and builds upon brilliantly subdued drumming and a slowly swarming, foreboding guitar complimenting Kesler’s whispered vocals. It leads into the xylophone-driven anthem “2am,” a soaring, paranoid song about phantom neighbors making too much noise, ending in a haze of white noise. The softly rumbling “Walk of Shame” stands as testament to the spectacular production Kesler has lent the album. “Ask Me About Jon Stross” is yet another spectacular song buoyed by chiming percussion and perfectly measured drumming. The song pulses with a tired elegance.

While there are certainly reference points (including last year’s superb Namelessnumberheadman and Yo La Tengo’s And Then Nothing Turned Itself Inside Out), Thee More Shallows’ immense creativity and steadfast idiosyncrasies stand as a fine example for young bands settling for tight jeans and lifted Gang of Four riffs. More Deep Cuts is an album littered with terrific songs that stretch effortlessly into one another, masterfully creating a cohesive, beautiful whole.