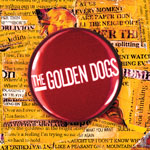 The Golden Dogs: Everything in 3 Parts 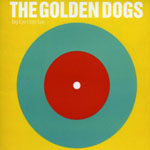 Even though Everything In 3 Parts, the Golden Dogs’s 2003/2004 debut, is no more a fully conceived genesis than two compiled EPs can allow, I feel compelled to just reiterate and remind the audience of the fact that the sophomore album is better. 3 Parts was good, and carried the burden of their churning, reverent live shows well, as far as I could tell. They sounded fun, from what I’ve been told, and when I imagine what kind of Super Furry animaled, Real Big fished, “Until the Day I.” dyed shows they probably put together in the Toronto scene, I like to think that their debut was a solid testament to their reputation. It’s all loud and loose but still eating shit in any manner of sugary melody; its catchiness flirts with anything it can grope. But Big Eye Little Eye is just better. Even if it’s studio-man-ship, or some extra added fancy in their dynamics, or some manipulative honing of PR, this new one is good. Even if for no other reason than Eye’s wassailed wholeness, this new album fulfills every shameless expectation.

And God bless’em. Ya know? May angels touch their unholy, unrestrained hearts. They’ve cleaned up their gimmicks, wrung out the pop-ska aspirations, harmonized the crap out of every single intended copse of substructure, and they’ve come out irresistible. That’s pretty great. But seriously.

So, it kinda lulls in the middle, sags at the end, but is mostly juicy, snapping a fine line between intricate and shaggy. So, “Dynamo” grounds to a halt before it’s even set off, tumbling into some gurgling guitars, and big toms spin behind, and then Dave Azzolini and Jessica Grassia start screaming the song’s title, and that’s on top, cringing away from the gnarling guitars. That’s how it sounds a lot of the time, when the lead singer and the keyboardist, the hands that feed, are afraid of the feral underlings, and can only just barely maintain a strained buoyancy over the heads of the rest of the band. Sometimes the singer and co-singer/keyboard sink and are swallowed by the bass, or by Neil Quin’s solo, and “Never Meant Any Harm” ends up leeching a lot of melody out of the transition from effects-diddled intro into buried chorus. Sometimes a song like “Construction Worker” is all about harmony and the boy/girl handshaking seems just the right amount of smooth. Both occurrences yield engaging results and never end up straddling the sawhorses of other, more trite examples of unabashed indie rock. In other words, they save more than Ferris ever could.

Of course, the band can’t help but enact variety through obvious genre excursions. “Saints At The Gates” is all knobby knees and one mariachi horn away from the crappiest of Calexico’s lot, but the chorus, forgive me, is just fucking catchy. “Run Outta Luck” shuffles bass and praddles with B-52 vocals to no end, but is still fucking catchy. A cover of Paul McCartney’s “1985” flaunts scrappy ’80s star charm, but is one shimmied catch. So, I must insist upon a point: the Golden Dogs glisten with applebummed, immediate, accessible, go-to, undeniable, incontrovertible catchiness.

The criticism simply ends there. The Dogs push no boundaries, and only a year after their debut, they’ve already crystallized, or matured, or dusted, or something else progressive and good. I must once again assert my original conviction, vindicating my decision in this disc’s superiority over its predecessor. As far as I can tell, the Dogs are used to endless, lazy comparisons anyway.