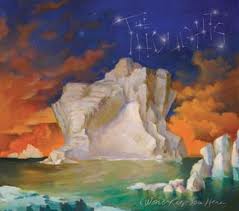 I Won't Keep You Here

When it comes to folk-pop, exactly how enchanting is too enchanting? From the tremor of the Oberst vocals to the rapturous harmonium of Freelance Whales; from xylophonic sprinklings to an array of hand-stitched album art all across the board: these charming idiosyncrasies and gestures of levity all serve to soften the edge of that bleak, Cold Mountain blade that the more earnest of wintry folk songs are sometimes wont to deliver. Enter someone like the Thoughts; with orchestral surges and even the most paced, restrained of their songs giving way to the choral crash and epic bursting forth of any and all elements, they’ve designed their debut LP, I Won’t Keep You Here, to satiate the most musically-climax-starved of folk-pop enthusiasts.

A collective of Ian Willian, Jon Horwath, and violinist Katie Mosehauer (from the similarly twee-ish band the Monday Mornings), the Thoughts share an awful lot in common with their borderline emo-folk contemporaries. Particularly, and most notably because of Willian’s vocals, Mumford & Sons. See for example his candid pleas and yearning howls into the ad nauseum repetition of the chorus in “Stages of Sleep.” Having found Mumford & Sons a little single-noted, there are moments of this album which would have me recommend it to basically anyone I know who did fall all over Sigh No More (2010). So, hey, Mumford & Sons fans, here you go.

The Thoughts bring the same emotive pull, certainly, while breaching the limited emotional—and even aesthetic—spectrum of Sigh No More. The tracks range from minimally executed to lushly driven, touching not only upon the usual failed loves and remorseful losses, but also relinquishing to a delicate, reassuring contentedness in songs like “Winterkill.”

The album’s focus on dynamics is evident and…mostly appreciated, if heavy-handed at times. There’s the barebones-to-begin-with campfire waltz-ballad of “You’re Not Happy Here,” the despondent intimacy of “Form and Color”; there’s the sparse, almost classical guitar feel of “Winterkill” compared to the theatrical builds of the startlingly Shearwater-esque “I Wanted To,” where Willian’s voice climbs into a falsetto glide and dip similar (if less sturdy) to Meiburg’s. But no song is too measured, too restrained to resist the eruption of a bridge with a crying violin, a tempestuous peal of percussion, a swarm of strings, or a bellow of vocals. Minimal executions—whether guitar, strings, or xylophone tinkles—inevitably and without exception give way to indulgent crescendos. These epic moments often emphasize Mosehauer’s violin work, which at times puts Willian’s vocals to shame in her skillful, light-footed runs and improvisations. It’s nice.

While having a lion’s share of successes, song-by-song these epic bursts can get pretty predictable. And as the album progresses, the plaintiveness of the lyrics in particular can run more tedious and even a little…unsettling. Verging on purple at moments, they swing between pleasantly country-twinged, if highly narrative, folk (things are “beautiful” and “made of glass and wire,” girls are “breaking branches in the snow,” etc.) and overwhelmingly cathartic, like in a vein-letting manner. Especially in a literal, vein-letting manner in notably awkward track “Cutting Skin,” which is awkward not only for the frequently repeated “cutting skin” chorus, but the abundance of cloying imagery all around it.

I Won’t Keep You Here serves as a primer in mainstream folk-pop: the acceptably charming, the awkwardly over-sharing, and right down to the downright uncomfortable and dysfunctionally cute. There are some sentiments that are significantly less appealing when sugar-coated, and this album, while very often being an attractive alternative or stand-in for Mumford & Sons and the like, touches on those points exactly. Which may be, well, too enchanting.