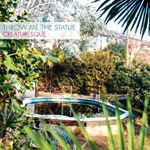 Throw Me the Statue

Throw Me the Statue’s sophomore effort, Creaturesque, is a cohesive, well-produced, thoroughly catchy pop album. This, so quickly on the heels of last year’s mess of a debut Moonbeams, comes as a bit of a surprise. Scott Reitherman, the band’s leader and pretty much sole force behind that first record, then jumped hyperactively between styles, relying on solid drumming and an array of crappy keyboards to carry him through. Songs bore little or no relation to each other. He occasionally stumbled across a great idea and was able to bring it to fruition (see: “Lolita,” “About to Walk,” “This is How We Kiss,”), but just as often he’d play the hell out of an idea that really had nowhere to go. It was a likeable album in small doses, but not without some serious shortcomings.

Creaturesque, on the other hand, sounds like Reitherman went in with a much more set idea of the sound he wanted to capture. That sound is nothing new: it’s a light, breezy pop that the Shins and Rogue Wave have plumbed recently, and innumerable others before them. I find it ridiculous to penalize the band for not blazing some exciting new path; reinvention and rediscovery are pretty well-established elements of pop music. If anything, it’s Reitherman’s ability to operate very well inside of these set boundaries that most impress here. “Ancestors,” for instance, feels like a song I’ve heard fifteen different iterations of before, but the band absolutely nails that rave-up chorus and rote breakdown in a way that sets it apart.

Part of the success of Creaturesque is due to Throw Me the Statue becoming more of a real band. They’ve been touring steadily over the last couple of years, and the album feels like the product of a steady four piece. The drumming is great throughout, the sound is much fuller, and Charlie Smith’s bass lines are playful in a sort of Eric Axelson-lite way. Most importantly, the band has moved away from the ramshackle playfulness of Moonbeams. That approach was charming sometimes, but it also led Reitherman into some serious pitfalls. Phil Ek handled the production work here, and, per usual, he adds more sheen than things really need, but it’s not overwhelming.

By abandoning that lo-fi, off-the-cuff charm, Throw Me the Statue has by no means forgotten the jams. The whole first half of the album is packed, with the airy, free-associative “Pistols” running into the denser, layered “Tag,” which in turn abuts the aforementioned “Ancestors.” “Snowshoes” is a fun reminder that Reitherman hasn’t tossed the crappy keyboards entirely, while “Dizzy from the Fall” bests anything from Moonbeams in terms of gleeful handclaps and playful horns. The final three songs slow things down, and it plays well, especially the pretty, reflective “The Outer Folds” closing out the disc.

For all the positive aspects of Creaturesque—most importantly, it really is a consistently interesting and fun listen, which is rare for a record like this—there is one real weakness: Reitherman’s lyrics. He seems pretty content to just rhyme and slip his way through the album, and he does it well, but as a result the songs rarely have the sort of bite that some of the more personal tracks on Moonbeams could claim. Regardless, Creaturesque is a definite step forward in a surprisingly short period of time, a real maturing of what continues to be a very promising band.