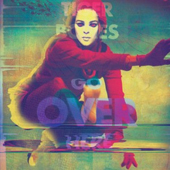 From local Chicago quartet Tiger Bones, Go Over Here is a nicely sketched-out debut EP, rife with baleful garage/surf rock dirges and interspersed with vocals of a brushed-tin-bright timbre. It bears a pernicious glint that recalls the Crocodiles: a blatant penchant for dude-wailing and real slopped-up moments of jaded adolescent appeal. Released primarily on a 12” vinyl March 3rd, the EP can also be grabbed digitally from Candy Diner for the attractive price of absolutely nada. Which is a pretty nice deal if, you know, you’re saving your precious fliff for the new Call of Duty maps or SXSW swag.

The opening reverb-happy track of the EP, “Kill Them,” tumbles in and out of rhythm with itself like a motor-skills-challenged teenager, flush with lo-fi echoes and assertive bass rolls, bookended by Mike Renaud’s metallic wailings. It’s a dirge-y, menacing song that not only slides in and out of pace, it outright bowls over tangled-up kerfuffles. But these are kerfuffles that seem capable of picking themselves up and brushing themselves off. The kick drum lines everything up like a drill sergeant, retaining a façade of well-meaning, orderly dance-rock for a few moments at a time. Before tripping over itself and into disarray all over again.

The “surf” in their band description can be mildly misleading. The surf inspiration (probably for the better) seems entirely contained in the more light-hearted, wavering guitar peals of otherwise more Joy Division-influenced tracks “Eyeliner” and “Silence.” The latter, contrary to its name, plunges into more percussion-steeped, leg-shaking territory, conducive to that particularly hip, “stung by bees” dancing Thom Yorke recently made viral.

Go Over Here is an EP that, while everyone else seems to be stuck in an agitated late-winter funk, maintains a mostly charming attitude by pairing the sequins-bright guitar of surf rock with not-quite-Wavves-fuzzed-out distortion. While garage bands are no rare entity to the Chicago scene, Tiger Bones is pretty generous with the hooks, as well as the pleasantly awkward moments, and are either very lucky with their messes or have a nice understanding of how to spiral into slop without sounding like they don’t grasp the concept of time signature. Whichever the case, and with fair consistency, it offers plenty of the roughly rendered, lo-fi recording sounds and anarchic depths that make finding and listening to debut EPs from local garage bands an always rewarding experience.